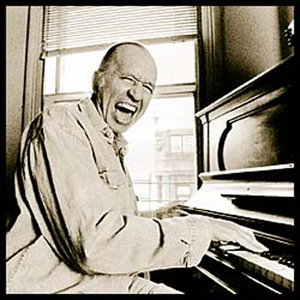 Born in the decidedly non-bustling Arkansas town of Cherry Hill and raised in Texas, Bob Dorough played clarinet in his high school band and earned a BA in Music from what is now North Texas University. Before that, three years with a Special Services Army Band had given him loads of valuable experience in both playing and arranging. In 1949, Bob made a bee-line for New York, where he took classes at Columbia University, immersed himself in the city's rapidly evolving jazz scene and took whatever musical jobs he could land.

For two years, he toured with Sugar Ray Robinson as the ex-boxer's musical director and often shared stages with notables like Armstrong, Hines and Basie. Later in Paris, Bob did five months as a singing pianist at the Mars Club and began what has proven to be a long musical association with Blossom Dearie.

His first record album (Devil May Care, released on Bethlehem in 1956 and still available) caused quite a stir. The buzz has continued over nearly five decades since then, with Dorough recordings issued on a variety of labels, both large and tiny. Along the way, Bob became the first ? and the last ? halfway decent singer to appear on a Miles Davis record. Among Bob's more illustrious songwriting collaborators over the years have been Fran Landesman and Dave Frishberg. His tunes now appear on albums recorded by dozens of other vocalists ? and many have found special favor as instrumentals, too.

Gen-Xers know his voice ? if not his name ? because they love the "Schoolhouse Rock" videos that entertained them on ABC-TV during the 70s, 80s and 90s.Bob handled the music for about fifty of these timeless little classics.

In the fall of 2002 (the same year that Pennsylvania's governor honored him as the state's Artist of the Year), Bob took his current trio on a State Department-sponsored tour of Latin America that involved over twenty concerts and workshops in seven countries.

Along the way, our man somehow found time to also serve as a professor in the music department at East Stroudsburg University.

These days, Bob ? a proud inductee into the Arkansas Jazz Hall of Fame ? does a bit of organic gardening at his Keystone State farmette. He's still writing great songs, too. Most important, though, he continues to delight audiences in clubs and concert halls on several continents.

As throngs of admirers worldwide can testify, Bob Dorough is only now reaching his prime. ~ http://www.bobdorough.com/

Too Much Coffee Man

Who's On First? (With Dave Frishberg)

Right On My Way Home

This Is A Recording Of Pop Art Songs

Beginning To See The Light (With Bill Takas) (Reissued 2000)