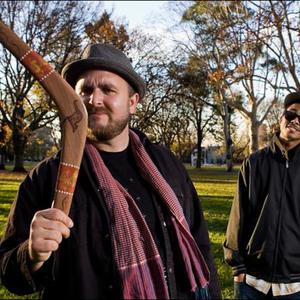 Blu is definitely a leader in the new school of Los Angeles emcees. His presence is undeniable, while his music captivates audiences regardless of race, class, and gender. His delivery flows flawlessly, while his content reflects the joy and pain of working class youth everywhere. Exile is a producer, DJ and occasional emcee previously known for being a member of the duo Emanon, along with Aloe Blacc. His style of production is known for its "laid back soulful vibes" and is influenced by such producers as J Dilla and Madlib.

Blu & Exile's first album as a duo, 2007's "Below the Heavens", took LA hip hop back to the place where Freestyle Fellowship, Jurassic 5, and The Pharcyde left off. The album received much critical acclaim, with many considering it one of the best releases of the year.

In 2011, with surprisingly little publicity, the duo released the long-awaited sequel, "Give Me Flowers While I Can Smell Them". Recording sessions took place over the course of 2009, however the duo decided to keep the release on hold due to bad audio quality and officially re-released the album on September 4, 2012 with a new updated track listing. The album features guest contributions from Fashawn, Homeboy Sandman, Johaz of Dag Savage, Black Spade of Hawthorne Headhunters, and ADAD.

In the Beginning: Before the Heavens

Give Me My Flowers While I Can Still Smell Them (Instrumentals)

Give Me My Flowers While I Can Still Smell Them