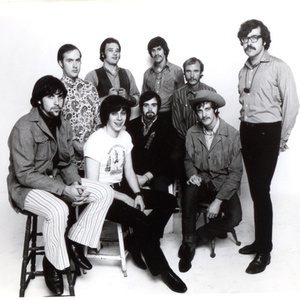 Founder Al Kooper conceived Blood, Sweat and Tears as an experiment in expanding the size and scope of the rock band with touches of jazz , blues , classical , and folk music. When Kooper was forced out of the band soon after its eclectic debut, Child Is Father to the Man, BS&T became increasingly identified as a "jazz-rock" group, although its music was essentially easy-listening rhythm and blues or rock with the addition of brass.

Kooper formed BS&T after leaving the Blues Project in 1967. The nucleus of the original band was Steve Katz, also of the Blues Project; Jim Fielder, who had played with the Mothers of Invention and Buffalo Springfield; and Bobby Colomby, who had drummed behind folksingers Odetta and Eric Andersen. The horn players were recruited from New York jazz and studio bands. Child Is Father featured songs by Harry Nilsson, Tim Buckley, Randy Newman, Gerry Goffin, and Carole King, along with Kooper originals and arrangements by Fred Lipsius for brass, strings, and studio effects. The band nearly broke up when Kooper, Randy Brecker, and Jerry Weiss left (Brecker to join the Thad Jones?Mel Lewis Band). Regrouping under Katz and Colomby, and fronted by David Clayton-Thomas (who had sung with a Canadian blues band, The Bossmen), BS&T entered a period of immense popularity. Blood, Sweat & Tears featured arrangements of music by French composer Erik Satie and jazz singer Billie Holiday, as well as by Laura Nyro, Steve Winwood, and others. It was the #1 album for seven weeks in 1969, sold over 3 million copies, and spawned three gold singles: ?You've Made Me So Very Happy,? ?Spinning Wheel,? and ?And When I Die,? each of which hit #2.

In 1970 the U.S. State Department sent the band on a goodwill tour of Yugoslavia, Romania, and Poland. Blood, Sweat & Tears 3 duplicated the Blood, Sweat & Tears mix of styles and was almost as popular. The album went to #1, and two singles, ?Hi-De-Ho? and ?Lucretia MacEvil,? hit the Top 30. But interest in the group began to wane, and 4, which contained almost all original material, barely made the Top 10. In 1971 ?Go Down Gamblin'? was its last hit. By the time Clayton-Thomas left for a solo career in 1972, BS&T's place on the charts had been filled by similarly styled bands such as Chicago, Chase, and Ides of March. Katz left the next year, first to join the short-lived American Flyer and then to an A&R position at Mercury Records.

BS&T became regulars in Las Vegas, with ever-changing personnel recruited largely from big bands like Maynard Ferguson's, Woody Herman's, and Doc Severinsen's. Vocalist Jerry LaCroix appeared between his tenures with Edgar Winter&rsquo;S White Trash and Rare Earth, while guitarist Mike Stern later played with Miles Davis' early-'80s band. Clayton-Thomas' return in 1974 briefly boosted BS&T's popularity, but Columbia dropped the group, and Colomby, the last original member, left in 1976. He continued to influence BS&T as producer of Brand new day and, with Clayton-Thomas, as co-owner of the band's name and catalogue. He then moved on to a career in A&R for several labels, as well as TV reporting. Since 1975 the live act has been billed as Blood, Sweat and Tears Featuring David Clayton-Thomas.