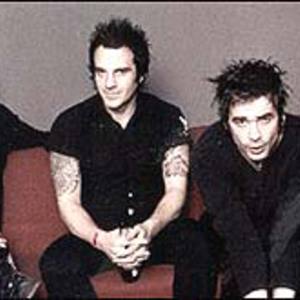 3 Colours Red were a British punk/ rock band. They achieved their biggest chart success at the end of the 1990s, along with other 'Britrock' bands that retained a certain pop sensibility, such as Ash and Feeder. The band was named by sticking a pin in a London listings magazine, Time Out. It landed randomly on an advert for the concluding part of Polish movie director Krzysztof Kie?lowskis ' Three Colors' trilogy. They went on to record two UK top 20 albums, including six top 40 singles.

In 1995 it was suggested by a mutual friend that geordie guitarist Chris McCormack (ex- Forgodsake) should contact Birmingham based singer/ bassist Pete Vuckovic (ex- Diamond head) to start a band, both had recently left their previous bands and were looking for something new to get their teeth into, McCormack made the call and the pair eventually met, they soon hit it off and decided to work on some songs together. Due to location they spent the following months trading 4- track recordings and developing song ideas via post until they had enough material to record a demo, they soon moved to London and began putting a band together.

Their initial success was owed to the fact that the members individually had a lot of experience and contacts under their belts, they were also being guided by producer/manager, Terry Thomas. Gina Walters (Warner Chapel Music) introduced the band to Thomas for management and helped the band secure their record deals with demo's that he produced.

Chris McCormack is the younger brother of Danny McCormack, ex- bassist in The Wildhearts, another British rock band who had already achieved commercial success and with whom 3CR would play some of their first shows. guitarist Ben Harding had established a strong track record as a founder member of U.K punk/pop pioneers, 'Senseless Things', Pete Vuckovic's stint with 'Diamond Head' had galvanised his songwriting ability and primed him for the responsibility of leading a band, and Keith Baxter's solid drumming and lengthy history with folk metal pioneers Skyclad provided the band with a reliable backbone. What came together was a remarkable combination of songwriting talent (thoughtful, but heavy, in Vuckovic, and punk rock, but pop-oriented, in McCormack) which combined with the management and production skills of Thomas, and added power of Harding and Baxter, created a winning formula. Influences were drawn from bands such as The Clash, The Sex Pistols and AC/DC.

Influential independent label Fierce Panda Records released their first single, "This Is My Hollywood" published by Warner Chappell Music. The band signed to Creation Records, after Alan McGee, Creation's founder and discoverer of Oasis, said that 3CR were the "most exciting band since the Sex Pistols".

While with Creation, the band recorded two albums. Pure (1997) was produced by Terry Thomas and accurately encapsulated the furious assault of their renowned live performances. There was a minor controversy over the single "Sixty Mile Smile", the lyrical content of which referred to frontman and main songwriter Pete Vuckovic's overnight hospitalisation after taking the drug ecstasy. The band were misguidedly criticised by the parents of Leah Betts who had died from excessive consumption of water - an occasionally noted effect of misinterpretation of government advice on ecstasy use. The line "Sunrise, just for a while - inject the drip" was just one of the warnings contained in a song that was wrongly criticised for 'glamourising' the drug. Thomas was eventually fired by the band prior to the recording of the second album.

Revolt (1999), produced by Dave Eringa (Manic Street Preachers), saw a more reflective side to the band emerge, with an epic feel evident on some tracks, notably the singles "Beautiful Day" and "This is my Time". The fury did not subside, however, as the live favourites "Paralyse" and the apocalyptic "Age of Madness" showed.

At the peak of their success, following the band's biggest hit, "Beautiful Day", they embarked upon tours with Marilyn Manson, Aerosmith and Silverchair.

The band imploded after they headlined the second stage at the Reading and Leeds Festivals in 1999, citing musical and personal differences. The rift was deepest between Vuckovic and McCormack, the band's songwriters. Excessive drug and alcohol use reportedly helped spin the already turbulent partnership out of control once and for all.

Vuckovic was quickly signed to 'Sony Records' and 'Sanctuary Management' and spent two years writing an album for his new project 'Elevation'. Unfortunately his A&R man was then sacked. As a result, the album was never released and the band was dropped. McCormack joined Rich Battersby (ex Wildhearts) and EMF producer Ralph Jezzard for a stint in 'Grand Theft Audio', who spent considerable time touring America before also being dropped.

The new line-up signed to Mighty Atom Records and 'Sanctuary Management' and recorded the album The Union of Souls with producer Joe Gibb (Funeral for a Friend/ Million Dead) in 2004 to critical acclaim but little commercial success. "Repeat To Fade" and "The World is Yours", taken from the album, were released as singles and the band toured Europe and Japan with Die Toten Hosen and The Donots as well as several UK headline tours and festival slots including the first Download festival.

In mid-2005, a double album ('If You Ain't Got a Weapon...') of the band's singles and b-sides from the Creation period was released by Sanctuary Records, with accompanying sleevenotes penned by Vuckovic. A live DVD recorded at the Islington Academy in 2004 was also released followed by a live album (Nuclear holiday) of the same show.

The band split again after a U.K 'farewell tour' with The Yo-Yos having been dropped by 'Sanctuary' and disapointing sales of the third album, continuing personal differences between Vuckovic and McCormack eventually drove the final nail into the bands coffin in September 2005.

Pete Vuckovic and Paul Grant have since formed Bassknives. Chris McCormack is now touring with Gary Numan as part of his live band. Keith Baxter went on to play with Baby Judas, based in his native Lancashire. Ben Harding continues to work in public relations, but is still playing, notably performing in a number of shows with former Symposium bassist and songwriter Wojtek Godzisz in 2009.

* 3 Colours Red appeared on BBC 1s classic chart countdown Top Of The Pops twice.
* 3 Colours Red toured with Aerosmith, Marilyn Manson, Silverchair, Muse, Stereophonics and The Wildhearts among others.
* Baxter briefly played with Irish rockers Therapy? during 2002.
* McCormack appeared as a panelist on BBC 2s music quiz Never Mind The Buzzcocks in 2001.
* Harding appeared on the 'Identity parade' section of Never Mind The Buzzcocks in 2002.
* This is my Hollywood was remixed by rapper Ice T in 1997.

The Union Of Souls