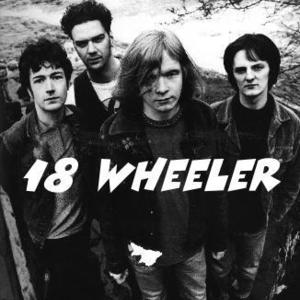 18 Wheeler was a Scottish rock band active in the early 1990s, consisting of Sean Jackson (vocals, guitar), David Keenan (guitar, vocals), Alan Hake (bass), and Neil Halliday (drums). Original bassist Chris "Pint Glass" Stewart left before any recordings were made, and was replaced by original drummer Hake. They met with very mixed reviews from the British press - many critics felt they were too similar to their influences, but some others saw the range of these influences as potentially a good thing.

Keenan left in 1994 to start his own group, the Telstar Ponies and was replaced by guitarist Steven Haddow. In the same year, the band released their first album Twin Action on Creation Records and in 1995 they released their second album, Formanka.
Their third album Year Zero, which saw them take a more experimental sample based approach, was released in early 1997. They were subsequently dropped by Creation following the recording of what was to be their fourth studio release. Although Alan Hake has stated that Creation Records did allow the band to keep the master tapes to this album, no plans to officially release it have materialised. Hake went on to co-found the Must Destroy record label.
The band were once introduced by Tony Blair at the 1996 Labour Party Conference. The future Prime Minister managed to wrongly introduce them as "Wheeler 18".