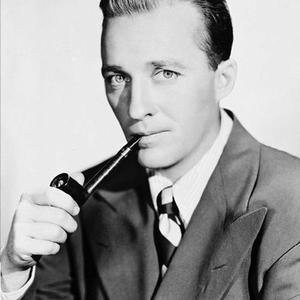 Harry Lillis "Bing" Crosby (born May 2, 1903 in Tacoma, Washington; died October 14, 1977 in Madrid, Spain) was an American Grammy Award winning singer and Academy Award winning actor who was one of the first true multimedia stars, from 1934 to 1954 Crosby held a nearly unrivaled command of record sales, radio ratings and motion picture grosses. Widely recognized as one of the most popular musical acts in history, Crosby is also credited as being the major inspiration for most of the male singers of the era that followed him, including Perry Como, Frank Sinatra, and Dean Martin.

In 1962, Crosby was the first person to be recognized with the Grammy Global Achievement Award and is one of the few people to have three stars on the Hollywood Walk of Fame. He won an Academy Award for Best Actor for his role as Father Chuck O'Malley in the 1944 motion picture Going My Way.

Bing Crosby's influence on popular culture and popular music is considerable, as from 1934 to 1954 he held a nearly unrivaled command of record sales, radio ratings and motion picture grosses. He is usually considered to be a member of popular music's "holy trinity" of ultra-icons, alongside Elvis Presley and The Beatles.

Bing Crosby popularized singing with conversational ease, or 'crooning'. His musical interpretations amalgamated rhythm and romance with scat singing, whistling, rhythmic improvisation and melodic paraphrasing as elements of a hotter, sexier sound than had been conceived before.

In 1926, while singing at Los Angeles Metropolitan Theater, Crosby and his vocal duo partner Al Rinker caught the eye of Paul Whiteman, arguably the most famous bandleader at the time. Hired for $150 a week, they made their debut on December 6, 1926 at the Tivoli Theatre (Chicago). Their first recording, "I've Got The Girl," with Don Clark's Orchestra, was issued by Columbia and did them no vocal favors as it sounded as if they were singing in a key much too high for them. It was later revealed that the 78 rpm was recorded at a speed slower than it should have been, which increased the pitch when played at 78 rpm.

Crosby is also credited as being the major inspiration for most of the male singers that followed him, including the likes of Frank Sinatra, Perry Como and Dean Martin. Tony Bennett summed up Crosby's impact, stating, "Bing created a culture. He contributed more to popular music than any other person - he moulded popular music. Every singer in the business has taken something from Crosby. Every male singer has a Bing Crosby idiosyncracy."

Crosby's recording of White Christmas is recognized as the best-selling single in any music category with over 40 million copies sold.

In 1962, Crosby was the first person to receive the Grammy Lifetime Achievement Award.

Only The Number 1's

The Best Of Bing Crosby - The Christmas Collection

A Centennial Anthology Of His Decca Recordings CD2