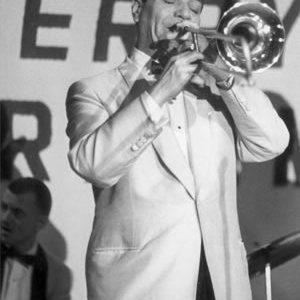 Weldon Leo "Jack" Teagarden (August 20, 1905 ? January 15, 1964), known as "Big T" and "The Swingin' Gate", was a jazz trombonist, bandleader, composer, and vocalist, regarded as the "Father of Jazz Trombone". Born in Vernon, Texas, his brothers Charlie and Clois "Cub" and his sister Norma also became noted professional musicians. Teagarden's father was an amateur brass band trumpeter and started young Jack on baritone horn; by age seven he had switched to trombone. He first heard jazz music played by the Louisiana Five and decided to play in the new style.

Born in Vernon, Texas, his brothers Charlie and Clois "Cub" and his sister Norma also became noted professional musicians. Teagarden's father was an amateur brass band trumpeter and started young Jack on baritone horn; by age seven he had switched to trombone. He first heard jazz music played by the Louisiana Five and decided to play in the new style.

Teagarden's trombone style was largely self-taught, and he developed many unusual alternative positions and novel special effects on the instrument. He is usually considered the most innovative jazz trombone stylist of the pre-bebop era, and did much to expand the role of the instrument beyond the old tailgate style role of the early New Orleans brass bands. Chief among his contributions to the language of jazz trombonists was his ability to interject the blues or merely a "blue feeling" into virtually any piece of music.
By 1920 Teagarden was playing professionally in San Antonio, including with the band of pianist Peck Kelley. In the mid 1920s he started traveling widely around the United States in a quick succession of different bands. In 1927, he went to New York City where he worked with several bands. By 1928 he played for the Ben Pollack band.
Within a year of the commencement of his recording career, he became a regular vocalist, first doing blues material ("Beale Street Blues", for example), and later doing popular songs. He is often mentioned as one of the best white male jazz vocalists of the era; his singing style is quite like his trombone playing, in terms of improvisation (in the same way that Louis Armstrong sang quite like he played trumpet). His singing is best remembered for duets with Louis Armstrong and Johnny Mercer.
In the late 1920s he recorded with such notable bandleaders and sidemen as Louis Armstrong, Benny Goodman, Bix Beiderbecke, Red Nichols, Jimmy McPartland, Mezz Mezzrow, Glenn Miller, and Eddie Condon. Glenn Miller and Teagarden collaborated to provide lyrics and a verse to Spencer Williams' Basin Street Blues, which in that amended form became one of the numbers that Teagarden played until the end of his days.
In the early 1930s Teagarden was based in Chicago, for some time playing with the band of Wingy Manone. He played at the Century of Progress exposition in Chicago. Teagarden sought financial security during the Great Depression and signed an exclusive contract to play for the Paul Whiteman Orchestra from 1933 through 1938. The contract with Whiteman's band provided him with financial security but prevented him from playing an active part in the musical advances of the mid-thirties swing era.
Teagarden then started leading his own big band. Glenn Miller wrote the song "I Swung the Election" for him and his band in 1939.[2] In spite of Teagarden's best efforts, the band was not a commercial success, and he was brought to the brink of bankruptcy.
In 1946 Teagarden joined Louis Armstrong's All Stars. Armstrong and Teagarden's work together shows a wonderful rapport, in particular their duet on "Rockin' Chair". In late 1951 Teagarden left to again lead his own band, then co-led a band with Earl Hines, then again with a group under his own name with whom he toured Japan in 1958 and 1959.

Teagarden appeared in the movies Birth of the Blues (1941), The Strip (1951), The Glass Wall (1953), and Jazz on a Summer's Day (1960), the latter a documentary film of the 1958 Newport Jazz Festival. He was an admired recording artist, featured on RCA Victor, Columbia, Decca, Capitol, and MGM Records discs. As a jazz artist he won the 1944 Esquire magazine Gold Award, was highly rated in the Metronome polls of 1937-42 and 1945, and was selected for the Playboy magazine All Star Band, 1957-60.
Teagarden was the featured performer at the Newport Jazz Festival of 1957. Saturday Review wrote in 1964 that he "walked with artistic dignity all his life," and the same year Newsweek praised his "mature approach to trombone jazz."
Richard M. Sudhalter writes (in 'Lost Chords: White Musicians and Their Contribution to Jazz', Oxford University Press, 1999): "The late trumpet player Don Goldie, who spent four years in Teagarden's band and had known him since childhood said that he 'always got a feeling that a lot of happiness was locked away inside Jack, really padlocked, and never came out..."
"Jack Teagarden died, alone, of a heart attack complicated by bronchial pneumonia in his room at the Prince Conti Hotel in the French Quarter of New Orleans on January 15, 1964. He was only 58. "I sometimes think people like Jack were just go-betweens," Bobby Hackett told a friend. "The Good Lord said, 'Now you go and show 'em what it is', and he did. I think everybody familiar with Jack Teagarden knows that he was something that happens just once. It won't happen again. Not that way..."
"...Connie Jones, the New Orleans cornetist working with Jack Teagarden at the time of the trombonist's death, was a pallbearer for the wake, held at a funeral parlor on leafy St. Charles Avenue: 'I remember seeing him there in a coffin, a travelling coffin. They were going to fly him to Los Angeles for burial right after that. The coffin was open and I remember thinking 'Boy he really looks uncomfortable in there'.
"'Not that he was that tall. Maybe five foot ten or so, at most. But he was kinda wide across the shoulders - and most of all he just gave you the impression he was a big man, in every way. In that coffin, - well, I can't really explain it, but he seemed to be scrunched up into a space that was too small to contain him'".
He was buried at Forest Lawn Memorial Park, Hollywood Hills in Los Angeles, California.
The coda of Teagarden's recording career is the album Think Well of Me, recorded in January 1962 and made up of his singing and trombone playing, accompanied by strings, on compositions by his old musical associate Willard Robison: available on Verve CD 314 557 101-2.
[edit]Compositions

Meet Me Where They Play The Blues