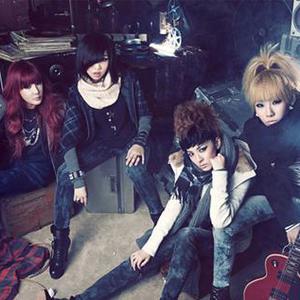 2NE1 (Korean: ????; pronounced "to anyone" or "twenty-one"), formerly known as 21, is a South Korean group under YG Entertainment Inc. in 2009. Previously promoted as ?female Big Bang" and 21, YG officially stopped using the name 21 because another Korean musical group was using the same name. 2NE1 is supposed to stand for "New Evolution of the 21st Century": "NE" meaning "New Evolution" and "21" standing for the "21st Century."

2NE1 has released a promotional song featuring the group Big Bang called Lollipop. The song was released as a promotional song for the CYON cellular phone Lollipop. Although it was not a promoted single (as it was an advertisement song, there were problems with network chart eligibility), "Lollipop" proved to be a strong chart hit, going to #1 on various online charts and topping music television network M.Net's online chart for four weeks in a row. However, despite this, the group did not officially debut until May. On May 6th, they released their debut digital single, Fire . The group released 2 music videos for the single, one known as the "space version" and the other known as the "street version. They then released a self-titled mini-album and promoted their hit "I Don't Care" followed by "Pretty Boy." Both songs received much success.

In August 2010, YG Entertainment founder, Yang Hyun Suk, announced that 2NE1 will promote three title tracks for their first full length album, To Anyone. In addition, three music videos would be produced, filmed, and released for the tracks. The album would be released on September 9, 2010.

2NE1 held their comeback stage of Korean music program Inkigayo on September 12. They performed their three title tracks, ???, GO AWAY, and Can't Nobody. The performances were recorded early in the day so they could perform at the Hallyu Dream Concert in Gyeongju later in the evening.

According to a YG Entertainment representative, promotions for the album alone cost the company a total of $850,195

2NE1 is made up of 4 members. All 4 girls have been YG Trainees and have been preparing for their debut for 4 years.

I Love You (Japanese Version) (CDS)