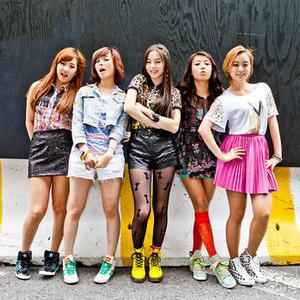 Wonder Girls (????) is a girl group from Seoul, South Korea, and consists of Sunye (??), Yeeun (??), Sohee (??), Yubin (??) and Hyerim (??). Their producer and manager is singer-songwriter Park Jin-Young and the Wonder Girls are signed to his talent agency, JYP Entertainment. Each of the five original members were selected through auditions. Debuting in early 2007, they became popular in the fall of that year with the song "Tell me." They have scored three consecutive #1 hit singles: "Tell me", "So hot", and "Nobody". In 2008, they won two Daesangs ("Artist of the Year" Awards).

Debuting in early 2007, they became popular in the fall of that year with the song "Tell me." They have scored three consecutive #1 hit singles: "Tell me", "So hot", and "Nobody". In 2008, they won two Daesangs ("Artist of the Year" Awards).

The group began their entry into the American market in 2009, with lead single "Nobody"; the single became the first song by a Korean group to enter the Billboard Hot 100. They are co-managed in the United States by JYP Entertainment and Jonas Group. They managed to place 4th with their hit single "Nobody" on the Canadian single charts for the past 2 weeks of March 2011.

Their first album, The Wonder Years, produced by Park Jin-Young and Kuon Teun, was released on September 12th, 2007.

The Wonder Girls debuted on February 10th, 2007 on Show! Music Core, singing Irony, the single from their d?but mini-album, The Wonder Begins. The mini-album went on to become a minor hit, selling 11,454 copies in 2007.

Throughout the rest of 2007, however, the Wonder Girls were beset by various injuries and health problems. On June 25th, member Ahn So Hee was sidelined for a month after tearing a knee ligament falling off a motorcycle during the filming of "??? ?? ??" (Some Like It Hot). The remaining four members continued performing until late July, when Kim Hyun A was pulled from the group by her parents due to their concern over her health, in particular, chronic gastroenteritis which had her hospitalized briefly in March and April.

On September 14th, 2007, the group (including their manager and stylist) were briefly hospitalized with minor injuries while returning from a performance at Dong-Eui Institute of Technology in Busan. The van which they were travelling in rear-ended a taxi, killing the driver of the taxi and injuring forty-seven others.

On September 5th, 2007, Good Entertainment, talent agency for the popular boy band Shinhwa signed their trainee Kim Yoo Bin over to JYP as a replacement for Hyun A. She debuted three days later in the group's live performance on Music Bank.

Their first full-length album, The Wonder Years, was released the following week, on September 13th, 2007, with "Tell me, a 1980's style disco-themed song that sampled Stacey Q's Two Of Hearts, as the lead song. Due to the last-minute addition of Kim Yoo Bin, the album version does not contain her rapping part; however, the performance version of the song was reworked to include a bridge with Kim's rap. The album became a hit, briefly reaching #1 on various television and Internet charts, including KBS's Music Bank.

The choreography for the song was simple and widely imitated: by October, many fan performances of the dance were circulating on video sharing sites such as Youtube and Daum, including one by a group of policemen who were eventually profiled on SBS's Star King. Many celebrities also put in their own performances, including Shin Hye Sung and Hong Kyung-min at their fan meetings, as well as many celebrities on various Korean television programs. Due to the popularity of the single, the group has had an extensive promotional schedule, including group-only and crossover performances on music shows, variety show appearances, and special performances and programs for various year-end music specials.

By December, the Wonder Girls moved on to ??? (Eebabo meaning "This Fool"), their second single. However, the girls planned to cut back on their schedule to prepare for their college entrance examinations. As of February 2008, they have ceased promotion of their album.

Wonder Girls had several showcases in China and all the members have worked hard on mastering the Chinese language.

The Wonder Girls flew over to the United States in early 2008, joining their mentor and producer Park Jin-young for his month-long "Bad Concert" tour as a special guest. Park has stated that the concerts are also meant to be a showcase for his other prot?g?s, such as Min, G-Soul, and Lim Jeong Hee. JYP Entertainment has announced that world-famous stars like R. Kelly, OutKast, and Will Smith are scheduled to attend the tour. As of the 2009, they have opened concerts for American boyband, Jonas Brothers for their USA tour.