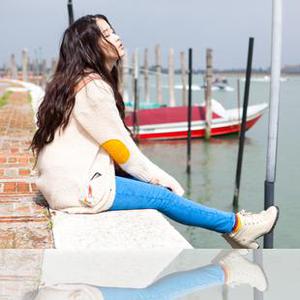 Her popularity is such that she is colloquially known in South Korea as the "nation's little sister".

2008: Debut
IU debuted on a Korean music program called M! Countdown in September 18, 2008. On September 23, 2008, she released her first mini-album, Lost and Found, in which the most famous song was the title track, "Missing Child." However, the album was not commercially successful. It wasn't until her follow-up album that she succeeded in breaking into the mainstream.

2009
On April 16, 2009, IU launched her first full album, titled Growing Up, with the lead promotional number "Boo." Within three weeks, "Boo" went up to the #1 contenders for SBS Inkigayo, and her name also went up twice on Take 7 together with other notable artists like SG Wannabe and Younha. The song also did well on KBS Music Bank K-Chart, on Mnet M!Countdown chart, and on various online music charts.

In 2009, IU sang the ending title song, "Araro", for the acclaimed MBC drama Queen Seon Duk, where she was recommended by the director, Sam Kim, citing her "clear tone and her lyrical sensibility." She was also featured on Mighty Mouth's album Love Class in the song "????." In late 2009, IU recorded MC Mong's song "Love Letter For You (Neoyege Sseuneun Pyeonji)," featuring SHINee's Key as a rapper in the song.

IU worked with some of South Korea's most famous musicians and producers for her third mini-album, REAL, released in December 2010. Lee Min Soo and Kim Eana, the creators of IU's previous hit "Nagging", helped produce her award-winning song "?? ?" ("Good Day"). IU received three SBS Inkigayo Mutizen awards for her performances of the song (on December 18 and December 26, 2010, and January 2, 2011), three awards from KBS Music Bank K-Chart (on December 24 and December 31, 2010, and January 7, 2011), and one award from Mnet M!Countdown on December 23, 2010.

Soribada, an online music service, combined the music downloads and streams from January 1 to March 30, 2011, to name IU's song, "Good Day" as the number one song of the first quarter. Her song "Someday" from the KBS Drama Dream High OST and her ballad "The Story Only I Didn't Know" placed 4th and 7th place, respectively ? showing that IU got 3 of the top 10 digital spots for the first quarter. Her first original composition, "Dreaming" was used in the drama "Dream High", but not released officially.

On June 18, 2011, IU held her first official fanmeeting and mini-concert at AX-Korea. It also marked the 1004th day since she debuted.

IU also sang a self-composed OST called "Hold my Hand" for drama series The Greatest Love.
On November 29, 2011, IU's second full length album Last Fantasy was released and achieved an ?all-kill' as all 13 songs immediately swept most of all the charts. The track list was revealed on November 22, 2011.

2012
On January 24, 2012, IU held a live showcase at Tokyo's Bunkamura Orchard Hall. On March 1st, 2012, she released a promotional video for the Japanese version of "Good Day", the title track of her Japanese single album. The album, which includes DVD footage from the showcase, was later released on March 21, 2012.

In early April, 2012, it was announced that IU will be holding her first solo tour, "Real Fantasy", starting in June. The tour features performances in six different cities across South Korea, including Seoul and Busan.

IU released the single album, "Spring of a Twenty Year Old" ("?? ?? ?"), on May 11th, 2012.[16] The album contains three songs, one of which is self-composed by IU. This song, entitled "Peach" ("???"), was digitally released before the album, on May 4th, 2012. A 26-minute-long documentary-style music video film was released alongside the album, featuring several interviews with IU that showcase her personal thoughts and experiences. This film contains footage of IU as she visits Venice, Italy.