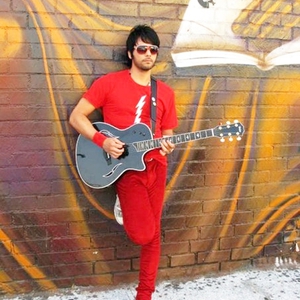 Luis Alberto Cuevas Olmedo (Santiago, September 12, 1967) is the former lead singer of the now-defunct Chilean rock band, La Ley. He grew up in Montr?al, Quebec, and is fluent in French, English, and Spanish. He was Born in Santiago, Chile, and now resides in Los Angeles, California. His family moved to Montreal, Canada to escape Pinochet's dictatorship. During a 1988 trip to Santiago, Beto met La Ley's drummer, Mauricio Claveria.

His family moved to Montreal, Canada to escape Pinochet's dictatorship. During a 1988 trip to Santiago, Beto met La Ley's drummer, Mauricio Claveria. The drummer invited Beto to join the band, which had just seen the departure of two of its founding members. Beto made his singing debut on the band's first full-length album, ?Desiertos?, quickly becoming the voice of La Ley. Shortly thereafter La Ley released its first big-label album, ?Doble Opuesto,? which featured a cover of the Rolling Stones ?Angie?, a huge hit that propelled the band widespread notoriety.

Since then, Beto Cuevas has been one of the main creative forces behind the band, writing and singing all of his tracks. Many band observers credit his early years in North America as the greatest influence in La Ley's sound, which is unique among Chilean and Latin American bands.
Beto Cuevas is recently on hiatus from La Ley and is working on new material for an upcoming solo disc. Beto has also been working on some small musical projects, including the song "Loud" which is a collaboration with Masters at Work, released in 2006. He also recycled the song Mentira, which was originally featured on the La Ley MTV Unplugged, and made a new version to be featured on the soundtrack for the movie "La Mujer de Mi Hermano".

Other musical projects include a collaboration with Chilean band Los Prisioneros on their latest album Manzana where Beto stepped in to play synthesizers, guitars and vocals on the songs "Insatisfacci?n", a reversion of the Rolling Stones classic "Can't Get No (Satisfaction)", and "Eres Mi Hogar". Your best bet for catching Beto Cuevas these days is to head to the movie theater. Beto plays the role of an Opus Dei priest in the film "La Mujer de Mi Hermano" and will appear on the soon to be released film "Borderland" by director Zev Berman, where Beto plays a satanic cult leader.

After the split of La Ley, in 2008 he began working on his solo career. His first album, entitled Miedo esc&eacute;nico was released on September 23 of that year, with the song "Vuelvo" as its lead single.