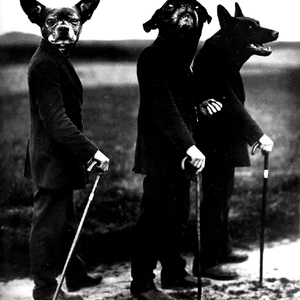 14. A deathrock band from New York, United States
15. A hip hop duo from Korea
16. A rock band from Czech Republic
17. A T-pop band from Thailand
18. A psy-trance musician from Greece
19. A collaboration between Paul Oakenfold and Steve Osbourne
20. A nu-metal band from Indonesia
21. A punk band from Slovenia

Despite a fall from a 4th story window which left him partially paralysed, Czral continues with the band and a new album was released in late 2008.

Both albums released to date have met with critical acclaim from rock and metal media alike, and been praised for their daring musical style.

02. Virus was a short-lived German band that released just two LP's during their brief existence: 'Revelation' (early '71) and 'Thoughts' (late '71). Though they've been often tagged as a krautrock band, Virus was actually a hard rock/psych '70's ensemble from the Bielefeld/Westphalia area. They also released superb live album 'Remember', which was recorded at Koln on April 28, 1973 for WDR Radio show.

03. One of the most influential Spanish language bands, Virus was an electro-pop and new wave band from Argentina which was led by Federico Moura until his death in 1988. They are considered pioneers of modern pop music in Latin America.

09. British thrash metal band.
- The band was formed in London, UK in 1986 by Henry Heston (Vocals / Guitar) and Tez Kaylor (Drums) who had played together in various punk bands from the age of fourteen and later, hardcore / metal. They were joined by John Hess (Bass) and Coke McFinlay (Lead Guitar) in 1987. Later that same year they recorded and produced their debut album, Pray For War which was released on the MetalWorks label.

An October 87 tour with Celtic Frost and Kreator took the band to numerous venues throughought the UK culminating in a a show at the reknowned Hammersmith Odeon in London.

Over the next couple of months they wrote more material, rehearsed, recorded and played two more major gigs. The first was supporting Cro-Mags at Hammersmith Clarendon and was followed by the fabled 'Christmas On Earth' gig at Queens Hall, Leeds two days later.

Virus were the opening act in a line-up that included Laaz Rockitt, Cro-Mags, Kreator, Overkill, Nuclear Assault, and Megadeth. Apart from Megadeth no-one got a sound check and the Virus set was effectively used to get the sound system up and running. The gig did not go down well with the press. Fortunately, the large audience supported the band and praised them for attempting to continue in the face of overwhelming odds.

The band's second album, Force Recon, appeared in April 1988 and this time the press reviews where more favourable. The general consensus of opinion was that the band had improved considerably. The band themselves regarded this album as their true debut as it was the first album to include Coke McFinlay's guitars (who joined the band too late to feature on the recording of the Pray For War album). It and was also recorded and mixed in more proffessionaly set surroundings.

In July 1988 the band played the support slot on Death Angel's UK tour which took in most major venues throughout England and Wales. At the end of the tour Virus headed back to London to record for the BBC's flagship, 'Friday Rock Show' at their studios in Maida Vale.

In the meantime Combat Records had released Force Recon in America and with minimal advertising the album sold in sizeable numbers. Combat also set up a US tour with the band supporting Death and DBC. The tour, scheduled for October 1988 eventually fell apart and the band never made it to the US that year.

Despite this setback, or perhaps because of it, the band returned to the rehearsal studios and started to write material for a new album. The album, Lunacy, was recorded at Raezor Studios, London in May 1989 and was scheduled for release worldwide via MetalWorks / AVM in July. Unfortunately, due to distribution problems, the release was delayed until September causing the cancellation of the short tour that had been scheduled for July.

In the Summer of 1990 Virus lost members John Hess and Coke McFinlay due to personal differences within the band. Henry and Tez left England for the U.S where they auditioned musicians for a new line-up. Eventually Virus USA took shape with new members Benny Herb (Vocals), Mark Baronowski (Bass), and Sid Sholly (Guitar). Demos were recorded and attracted considerable interest from the American press as well as various major labels. Unfortunately due to economic cicumstance, funding dried up and the US projects could not continue.

Leaving the US, Virus went back to England but the American members were refused entry to the UK by immigration authorities and 'red tape' so the band decided to finally and reluctantly hang up their boots and concentrate on other projects.

18. Solo psy-trance project of Agis Deligiannidis, a musician from the city of Drama, northern Greece.

19. A side-project of Paul Oakenfold and Steve Osborne.

20. Virus is a nu metal band from Indonesia.

21. Virus is a punk band from Slovenia wich is no longer active.

The Agent That Shapes The Desert

Still Fighting for a Future