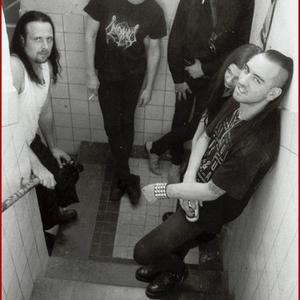 Bethlehem is a dark metal band from Grevenbroich, Germany, formed in 1991 by J?rgen Bartsch and Kl?us Matton. Before begetting Bethlehem, Bartsch and Matton used to play in a German thrash metal band called Morbid Vision. Much of the themes in their lyrics revolve around sickness, morbidity, suicide, death and madness that may to some extent be personal to the band, though they are very difficult to understand even for German speakers because they make absolutely no sense whatsoever.

Rainer Landfermann, also known from the German death metal band Pavor, achieved legendary fame for his vocal work on "Dictius te necare" (Latin: "You must kill yourself") and "Alles Tot". In 1998, Bethlehem collaborated on the soundtrack for the American movie "Gummo" with the tracks "Schuld Uns'res Kn?cherigen Faltpferds" and "Verschleierte Irreligi?sit?t". On "Sardonischer Untergang im Zeichen irreligi?ser Darbietung", Landfermann was replaced by Marco Kehren from the band Deinonychus, Guido Meyer de Voltaire (Aardvarks) in turn replaced Kehren on "Schatten aus der Alexanderwelt" and "Mein Weg". With "Schatten aus der Alexander Welt" the band altered their style and abandoned the black and death-doom influences that made up their personal and distinguished style, favouring a more Neue Deutsche H?rte (New German Hardness) and electronic approach.

Bethlehem faced censorship and was even banned from playing in some German cities. It started when Matton gave one copy of their first demo to a 14 year-old boy. After a while his mother started to call the band, saying that because of their music, her son become aggressive and built a "Satanic altar" in his room. In cooperation with other parents, they started a crusade against Bethlehem and their "satanic" music (although Bethlehem were never a satanic band).

J?rgen Bartsch, founder and bass player of Bethlehem, defines dark metal as such: "Dark Metal is a lifestyle, probably more than this. To the time we started with our own music, some of us made some ugly experiences with things like suicide or death in general. Myself was just back from the big German city I once lived in, where I lost nearly all of my friends and social contacts coz of drug overdoses or just coz they were bored by life in general and therefore killed themselves. Of course also lost people who were very close to me which totally shocked my complete appearance, from one day to the other let me feel lost and lonely again. When I came back into this miner?s ghost-town here, I had no friends, no nothing but only was buried in pain and suffering. Bethlehem was a way out, it totally helped to explain all those negative feelings and emotions into something so beautiful, which made it so easy to change all those dark things into something which always was a huge hold in my life, into music. Our former guitarist, Kl?us Matton also lost his father who committed suicide and lost his mom who died from cancer and surely experienced everything in a similar way than I did. The others, Steinhoff and specially Classen came from broken homes and when I met them for the very first time, I very strongly felt that they also were completely lost. Basically four people came together, of such a kind that they all deeply were buried into something really dark, like living in a huge black hole. With no way out, no options or possibilities. Complete darkness, mental darkness. So the only chance to not follow the circumstances was to destroy darkness with music and though this was done instinctively, I believe today that the creation of a band like Bethlehem was the only chance to save our all lives. Not as a therapy or so, coz the therapy to that time were cigarettes and alcohol, more a promising path of light, completely born in the subconscious. We never discussed things like that but we all wanted to give it a name. Do remember this one rehearsal, shortly before we started recording our first demo, when suddenly our singer said: ?the music is not evil, but it is dark. We all looked at each other and we knew it, that we exclusively play 'Dark Metal' and nothing else."