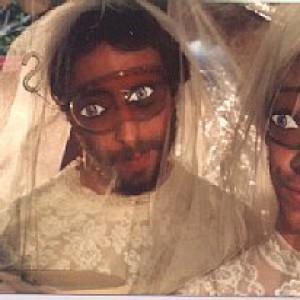 Barnes & Barnes, consisting of fictional twin brothers Art & Artie Barnes, are a "novelty rock" duo based in Lumania, a fictional mythological civilization (similar to Lemuria or Atlantis). The "novelty rock" genre is named as such because most of their music is standard rock or pop music with heavy comedy elements. Their real-life alter egos, Robert Haimer and Bill Mumy, are based in Los Angeles, California, USA. Mumy is also well known for playing Will Robinson in the TV series Lost in Space and Lennier in "Babylon 5."

Barnes & Barnes formed in 1970. Robert Haimer and Bill Mumy were childhood friends who occasionally jammed together on their musical instruments. Around 1968, they would shoot short films with a Super 8 motion picture camera, dubbed "Art Films". The two began calling each other "Art", and thus, their alter egos were born. Their surname, "Barnes" was taken from a Bill Cosby comedy routine called "Revenge", in which a character called Junior Barnes throws a snowball at Cosby as a child. Originally, both Haimer and Mumy were named "Art Barnes", but Haimer's alter ego was publicly renamed "Artie" in 1979 to differentiate between them. To each other, however, they both still remain "Art". They first received airplay on The Dr. Demento Show in 1978 with their songs "Boogie Woogie Amputee" and "Fish Heads." The latter tune was released as a single on their own Lumania Records in 1979 and remains their best-known song, and the most requested song in the history of The Dr. Demento Show. The song was often misattributed to The Chipmunks for its processed high-pitched chorus:

Barnes and Barnes have produced two albums for Wild Man Fischer, and one album for Crispin Hellion Glover.