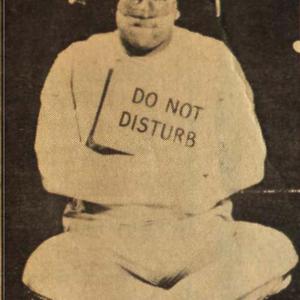 Napoleon XIV was the pseudonym of record producer Jerry Samuels (b. 1938 New York City) who had moderate success with his composition "They're Coming to Take Me Away Ha-Haaa!" when first released in 1966 (reaching #4 on the UK Singles Chart that year). He achieved a blockbuster success with the record when it was re-issued by Warner Brothers Records in 1973. The first single Samuels made was in the late 1950s and was called "Puppy Love".

The first single Samuels made was in the late 1950s and was called "Puppy Love". As Napoleon XIV, Samuels recorded an album of insanity-themed novelty songs: "Bats in my Belfry," "I'm Happy I Live in a Split Level Head," "I Live in a Place Where The Nuts Hunt the Squirrels," and a hilarious answer to the would-be hit single ? billed to "Josephine XV," told from the dog's celebratory point of view, and called "I'm Happy They Took You Away!". This set was re-released by Rhino Records in the mid-1980s.

Samuels achieved no further mainstream success, bombing with a follow-up to "They're Coming To Take Me Away," called "They're Coming to Get Me Again!". However Samuels co-wrote the Sammy Davis, Jr. song "The Shelter Of Your Arms". Napoleon XIV has remained a cult favorite to this day and is often identified with the Dr. Demento radio program.