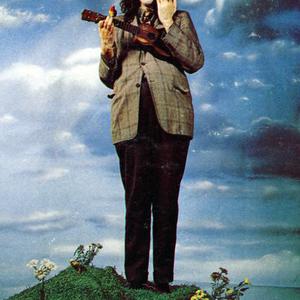 The name Tiny Tim was first popularized by author Charles Dickens, and has been used by several musical performers including a jump blues singer, and a rockabilly artist but is most commonly associated with Herbert Buckingham Khaury (April 12, 1932 ? November 30, 1996), an American singer who achieved temporary fame singing in a falsetto vibrato-laden voice. He was most famous for his rendition of Tip-Toe Thru The Tulips With Me a No.

He was most famous for his rendition of Tip-Toe Thru The Tulips With Me a No. 17 chart hit in 1968 that was delivered in his distinctive high falsetto. He became well known via numerous and highly rated appearances on television including Johnny Carson and Laugh-In. On December 17, 1969, 45 million viewers watched Tiny Tim get married on NBC TV via an appearance on Johnny Carson's Tonight Show program. He was widely known, but generally thought of as a novelty act, and was not taken very seriously, although his records displayed a wide and serious forensic knowledge of early American stage songs.

Growing up with the squeaky clean entertainment choices of the 1930's and 40's, Herbert preferred the romantic crooners of the late- 19th and early-20th centuries and cinematic singers like Bing Crosby and Rudy Valee were amongst his early favorites.

After stints in the Greenwich Village folkscene of the 1950's and 60's billed as Vern Castle, Larry Love, Darry Dover and Emmett Swink, Khaury eventually settled on the name Tiny Tim. He doffed white facial powder makeup, and utilized a ukulele and songs that only a true American musical archivist would know. Despite some amateur demo acetates, his first professional recordings were with producer Richard Perry for the Blue Cat in 1966. Refusing to be deterred despite many years of setbacks in the notoriously tough New York show biz world, Tiny Tim earned a regular gig at a hip club called The Scene, and was soon signed by Mo Ostin to Warner Brothers subsidiary Reprise, then also the home of Frank Sinatra, and his daughter Nancy.

His 1970's label VicTim failed as a business venture, and he once told an interviewer that his next label Toilet Records was so-named "because that's where my career went." By 1978, the public's taste had soured on his act and Johnny Carson refused to book Tiny Tim anymore. However bleak the financial picture appeared, Tiny Tim refused to relent whatever spotlite remained for him, and toured constantly. through the 80's and 90's appearing at punk rock and gay nightclubs, making numerous solo recordings and some with the Texas-based polka band Brave Combo.

He died on November 30, 1996, after a heart attack while performing onstage at a benefit for the Woman's Club of Minneapolis. He was buried with his ukulele.

Down In The Basement (With Bob Dylan & The Band)