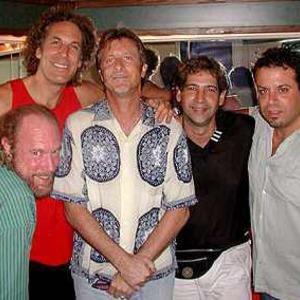 Jazz is Dead is an instrumental Grateful Dead cover band that interprets classic Dead songs with jazzy influences instrumentally. There have been different line-ups over time with T Lavitz being the only mainstay off all of them. Three years after the Grateful Dead frontman Jerry Garcia died, the first line-up of Jazz Is Dead released their first album, Blue Light Rain, which is in fact the first lyrical line from the song "Unbroken Chain".

The band's first line-up consisted of: Jimmy Herring (guitar), Alphonso Johnson (bass), Billy Cobham (drums) and T Lavitz (keyboards). In 1999 Billy Cobham was replaced by Dixie Dregs drummer Rod Morgenstein and Phil Lesh and Friends drummer Jeff Sipe. Their second album, Laughing Water, was released in 1999; it was a track-for-track cover of Wake of The Flood.

In 2001 guitarist Jeff Pevar replaced Jimmy Herring. Little Feat's Kenny Gradney also did a stint with the group on bass. The group went through a few more line-up changes over the years eventually regaining its dual-drummer line-up in 2006 with the addition of bassist Dave Livolsi. In March of 2006 this line-up set out for a month long tour featuring the music of Blues For Allah to coincide with its 30th Anniversary.

Currently, Jazz is Dead has no plans for further album releases or tours. But they are still interested in jazz.