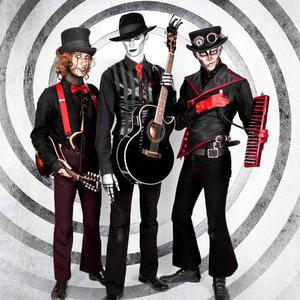 Steam Powered Giraffe is a pantomime musical group based in San Diego, CA. Members include David Bennett (The Spine) and Christopher "Bunny" Bennett (Rabbit), and as of October 2012, Sam Luke, former human, became a robot (Hatchworth). Former members include Erin Burke (Upgrade) and Jonathan Sprague (The Jon). The robots are also assisted by the following humans: Michael Reed and Steve Negrete.

Their music consists of multiple harmonies over a guitar, as well as melodica, mandolin, and tambourine. They often do improvisational skits and are very much a product of street performance, for much of their appeal is drawn from steampunk style clothing, metallic face paint, and robotic movements.

Live At The Globe Of Yesterday's Tomorrow