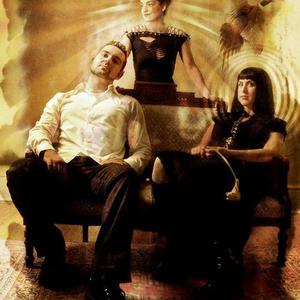 Johnny Hollow, often abbreviated JH, is a band composed of singer Janine White, digital artist Vincent Marcone and cellist Kitty Thompson. The band was formed in 2001, Ontario, Canada. Marcone, known for his wide range of digital artwork over almost a decade, launched his website My Pet Skeleton. White was asked by Marcone to design the sound effects. Meanwhile, White and Thompson were also experimenting in their recording studio.

They had sessions as gig musicians, but these weren't satisfying enough for them. My Pet Skeleton quickly rose to the forefront of the web hall of fame. The trio was heavily encouraged by the overwhelmingly positive response of the web audience, and decided to form an alliance. Marcone became the head of the trio and was the speaking voice of the project: a sonically-inspired and visual trio. Their first material was presented on the My Pet Skeleton website.

The Mission: "There is a creative famine in the current state of our popular culture. We are living in a world of plastic pop songs that are lip synched by an army of synthetic faces. Our homes are consumed by a flickering blue light that brings us absent entertainment. For the most part, our cathode ray tubes have been force feeding us images and sounds of zombified pop icons. Their dead eyes are fashioned with wide smiles. And yet we watch them, entranced by those soulless grins, hypnotized by their massive success. We just can't help but feel pinned against a sonic wall by this new wave of starlit mannequins. And to this we say: Fuck that. Johnny Hollow won't have it."

This manifesto taken directly from the band's website, the trio of Kitty Thompson, Vincent Marcone and Janine White, also known as Johnny Hollow, make their intentions perfectly clear: fight the war, fuck the norm, as former Rage Against the Machine icon Zack de la Rocha famously declared at a woebegone time in music when his rap-rock angst was still fresh and still mattered. Recorded in Waterloo, Ontario in a studio appropriately called Mary's Madhouse, the self-titled Johnny Hollow is exactly what the group pimps itself to be: a deviation from the trends, an unorthodox consummation of harmony, instrumentalism and theory that may ring as quirky upon the first listen. In all honesty, it takes a second listen in order to fully gain and appreciate the congruity and elegance of the threesome's interplay. Johnny Hollow is a Goth odyssey, a definitive statement that swims in its own loathsome dirge while taking a direct swipe at the corporate music industry. Johnny Hollow strives to be ultra-hip and only with an attentive ear and multiple listens does one begin to understand how hip the disc really is.

The opening track Bag of Snow features an interesting haunt with its confused beats and gloomy piano amidst its seething, hateful muse as evidenced in the lyrics: "Theme parks and hallmarks and sermons and pop songs and impotence and innocence just make me angry." A listener seasoned to well-practiced ambassadors of pessimism such as Robert Smith, Morrissey, Johnny Rotten and Ian Curtis might take these lyrics to be a tad trite in comparison. Yes, the evil major labels suck and everyone knows it. Point taken. However, the preceding stanza, "It's not brave to be unkind, I can't speak the truth that is lacking in this ornate corporate Christmas tree," that's far more introspective and well-thought out; it makes the veteran listener forgive Johnny Hollow for tackling such familiar (and dare one say it, posh) territory.

Halfway to God begins the true art of Johnny Hollow with Kitty Thompson's confident cello work that stamps its vibrant seal across the entire project, while Vincent Marcone's droning vocals ring like Faithless. The tempo is cautious at times while Thompson's cello maintains an unsettling smoothness abreast the warped electronic tweaks to Marcone's narrative. Rasputin is slow and mundane, intentionally so, a deranged tribute to the namesake. The beat is lumbering while Thompson drags her cello notes out purposefully to aggravate, even despite, the passionate bridge. Janine White's vocals are Goth for Goth's sake, especially on the delicious lyric, "I'll move you with my lusty sighs," while Kitty Thompson croons softly in support. Kind of hard not to get horny after that one.

Motherless Child ruins that vibe. A depressing, lamentable song that has Thompson's cello tearing at the heart, offset by the maniacal keyboards of Janine White. The effect is dreadful and heartfelt. Gone changes the pace a bit with another lyrical chant by Marcone, who is given assistance by a smart melody and beat. The string work sounds much less maudlin here while the piano carries Marcone's cantor with sweeps and gusts that helps kick Johnny Hollow into proper gear, whereas the previous tracks are more aloof, trying to find a voice amidst their purposeful statements.

Stolen features a loopy intro that is lambasted by a fuzz distortion of Thompson's sassy cello and further ripped up by a dirty beat and scruffy tempo. White checks in with a sonic crunch of electric guitar mayhem and angry synths that punctuate the grimy effect. Ironically, Stolen is one of the cleanest and most agreeable tracks on the disc. Mary has an inspirational cello lead-in challenged by some weird programming, but by the time the song finds its footing, there is gorgeous but cryptic organ work and wavy, sultry beats that accent another clever lyric: "But I'm afraid of ticking time and her tears are prettier than mine." Dark Thing continues the pace with its supple trip hop beat and frolicking cello, the truly "cool" song of the disc. One that might be pictured as a hot soundtrack to steamy sex with scorching candle wax cascading down a lover's navel.

Shock Me Peter is a somewhat alarming but acceptable mix of narrative and instrumentation, a song where Johnny Hollow obviously tries to out-Cure The Cure with its over-the-top lyrics ("Thoughts of gray holes, of angel kisses, of golden showers, all cured by a holy bottle of H2O?), coupled by the peculiar shift between Marcone's recitals and White's far-too-comfy choruses that seem out of place the first transition, but strangely settles in nicely in return bouts. An odd couple that somewhat gets along. Skeleton Song has a playful lead opposed by Thompson's heavy and somber cello, while the spritely keyboards seek to negate the slow waltz danse macabre tempo established in the song. Two emotions strike the listener: giddiness and despondency. Which way to feel? Fret not. Johnny Hollow delivers the answer by the song's angry and aggressive d?nouement, an exciting finish to a song suffering from split personality. Finally, Tremor sparkles with a Tori Amos-like piano melody that navigates the spiteful tune, apparently about a spouse abuser. The hammering, jagged twists to the beat and constant change of instrumentation causes a near overload, but pulls back just in enough time to make it exhilarating. The obligatory hidden track is a pleaser with a hard beat finale that delivers a most appreciated power punch.

Johnny Hollow is an overtly sophisticated recording developed between three active minds that want to take you in different directions at their individual paces, all of which are quite fast. This, of course, causes instant delirium in the average listener, but that seems to the methodology to Johnny Hollow. They don't want the average listener; the average listener can take comfort in his Nickelback or her Christina Aguilera. Johnny Hollow wants the patient ear, the explorative ear, the one that says "what the shit?" the first time around, but comes back a second time and a third. By that time, you're hooked, you're theirs, and like those cathode rays that condemn, you're Johnny Hollow's captive.

On their official website, http://www.johnnyhollowmusic.com/, you can play two games. The first game, 'Riddle Me This', let's you solve riddles, one for every song. Getting them right gives you the opportunity to download free songs. The second game 'Scuttlebuggery', let's you play as a bug, getting drops of different colors to a sink. Clearing levels gives you a password, with which you can listen to songs on the site.
Listening to the latest album, Dirty Hands, is also available on http://www.thishollowworld.net/

A Collection Of Creatures