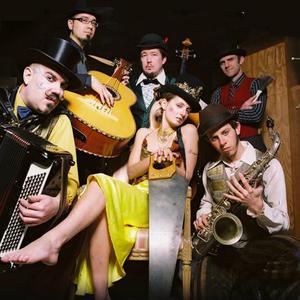 Vagabond Opera is at the vanguard of a growing popularity in the Neo-cabaret phenomenon, and through their theatrical performances, lyrics in 13 languages, and an eclectic repertoire, they liberate opera from its usual construct, expanding musical and theatrical biodiversity. Vagabond Opera has performed all over the USA, including the Kennedy Center in Washington D.C. They have been featured on NPR, in the Washington Post and Jazziz Magazine, and have shared stages and players with Pink Martini, The Decembrists, Al Franken and the Oregon Symphony. Vagabond opera has two full length albums and will be releasing their third album in the Summer of 2008.

Vagabond Opera was created in 2002 by European-trained opera singer and composer Eric Stern. Then disillusioned with the classical opera world, Stern created a new context for opera: Performance on a more intimate scale incorporating not only opera but elements of Weimar Cabaret, Arabic and Balkan forms, and the original music that springs from the ensemble's fertile creative work. This is not your granny's opera, but a visceral artistic ensemble that features powerful instrumental and vocal performances coupled with a highly eclectic and theatrical experience.

Sing For Your Lives

Get on the Train