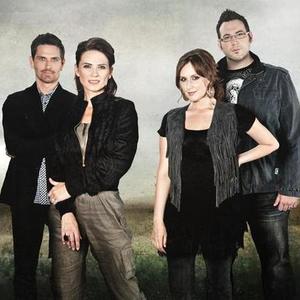 12. A psytrance artist from the UK
13. A rock band from Sweden

Avalon was formed in 1995 by Grant Cunningham, A&R Director at Sparrow Records. Cunningham was in search of a vocalist group that could sing tight harmonies and carry God's message to the world. Cunningham publicized his intentions and demo tapes flooded him, but nothing fit his desires.

After letting the idea of Avalon to rest a while, Cunningham visited a coffee shop to listen to a potential singer. However, another artist, Michael Passons, actually caught his attention. Cunningham contacted Passons about his plan for Avalon. Passons prayed about God's will and then decided this was where God was leading him.

Soon after, TRUTH vocalist and South Carolina native Janna Potter Long heard of the intentions for Avalon. Cunningham happened to hear her sing at a Truth concert and liked her because she was "such a good singer."

Rikk Kittleman and Tabitha Fair became part of the group, but each left after a short time. Tabitha was offered a solo record deal, and Rikk left for other opportunities. With Avalon having two member openings, Long remembered previous fellow TRUTH member, Jody McBrayer. Long contacted McBrayer about his interest in the group and McBrayer auditioned. A few days later, Cunningham contacted McBrayer stating that he was now a member of Avalon.

Finally, Nikki Hassman Anders was hired to become the fourth vocalist of Avalon. Hassman recorded two albums with Avalon, Avalon (December 26, 1996) and A Maze of Grace (December 1997), but left in May 1998 to pursue a solo career with Sony Records.

Cherie Paliotta Adams was selected to replace Hassman after one of Avalon's co-managers listened to a country music demo tape recorded by Adams. Even though country is not a style of Avalon records, executives chose Adams knowing she would be a perfect fit. Adams recorded three albums as a member: In A Different Light (March 23, 1999), Joy: A Christmas Collection (September 26, 2000) and Oxygen (May 22, 2001) as well as releasing a remix album, O2: Avalon Remixed (March 2002). Cherie departed the group to pursue a solo ministry that is geared towards single women, and, in September 2002, she was replaced by Melissa Greene, Janna's fellow former band member of the now disbanded group TRUTH.

On March 25, 2003, Avalon released a greatest hits record, Testify to Love: The Very Best of Avalon, which featured the #1 hits "Everything to Me" and "New Day." It was the last album to include founding member Michael Passons: the Avalon member known as 'Father Avalon' left only months after the album's release (in summer 2003) to pursue a solo career, and was replaced by Janna's husband, Greg Long.
On February 24, 2004, Avalon released the studio album The Creed. Three singles were released: the carrier "All," which made it to #2 on the Adult Contemporary Christian Songs chart; the Jody McBrayer showcase "You Were There," a #2 Inspirational Charts hit, and Greg's song "I Wanna Be With You."
Avalon's sixth studio album, Stand, was released on January 24, 2006. Carrier single "Love Won't Leave You" peaked in the Top 20 of both Billboard Hot Christian Songs and Hot Christian Adult Contemporary charts. The next single, "Orphans of God," was serviced to radio on April 7, 2006 and peaked in the Top 5 of Radio & Records' Inspo chart the week of August 11, 2006. Additionally, "Somehow You Are" was released to radio in August 2006.

During the summer of 2007, Jody McBrayer decided to depart the group due to a heart condition in an effort to avoid getting a Heart attack. But, before he left, he found time to record one last album with Avalon. On February 26, 2008, Avalon released their ninth album, Another Time, Another Place: Timeless Christian Classics. A headlining tour, titled "The We Will Stand Tour", with Michael English, the Daniel Doss Band and new Fervent Records girl group Cadia followed in spring 2008 to promote the classics album.

On November 13, 2007, Avalon released a digital EP featuring three songs from the album: singles "God is in Control," "Another Time, Another Place" and a cover of the Amy Grant classic "Thy Word".

Current Avalon member Jeremi Richardson joined the group in late 2007 to replace Jody McBrayer. On November 11 2007, Melissa Greene announced at a show in Spring Arbor, Michigan, that it was the first concert with Richardson officially being a member of the group.

It was confirmed in late 2008 that EMICMG would release Avalon: The Greatest Hits, a compilation of successful hits from previous Avalon recordings. It is notable that the track list, as published by the record label, bears many of the same hits featured on the 2003 release Testify to Love: The Very Best of Avalon (11 of the 16 songs featured on the older hits record also made the cut for the new one).

The album does, however, contain four updated radio successes from three of Avalon's projects that have been released since the last hits record, namely "All" and "You Were There" from The Creed (2004), "Orphans of God" from Stand (2006), and "In Christ Alone" from Faith: A Hymns Collection (2006).
In addition, the new hits album features a new song from Avalon entitled "Still My God", which was serviced to radio on January 9, 2009. On March 31, 2009, "Still My God" became Avalon's first #1 single since "New Day" released in 2003 (ironically from Avalon's previous greatest hits title).

On May 15, 2009, Melissa Greene announced her resignation from Avalon on her personal website upon accepting a position as Pastor of Music and Arts at Gracepointe Church in Nashville after a call from God. Melissa will continue her Solo Career as well. On May 21, 2009, Avalon announced that Jeremi's wife Amy Richardson would fill Melissa's spot as the newest member of Avalon. Janna will be on maternity leave from Avalon next year after her baby is born. Janna and Greg are waiting until the baby's born to find out if it's a Boy or a Girl.

Shortly after the release of the recent hits record, Avalon announced they would be returning to the studio to record a brand-new, all original album (their first since Stand in 2006) due out September 15 on E1 Music (formerly Koch Records), thus ending Avalon's long-time stint on the Sparrow Records (EMI Christian Music Group) label. Avalon began recording vocals for the new album with Amy Richardson as its new member on May 19, 2009. It was announced in June 2009 that the album would be titled Reborn. The first single "Arise" was released to Christian radio in August 2009; on December 9, it officially became Avalon's 22nd career #1 radio hit, topping Billboard's Soft AC/Inspirational chart. This came just weeks after Avalon wrapped up their co-headlining tour with fellow Christian recording group Selah in the fall of 2009, which sold out many venues and promoted the groups' new albums.

2. A Japanese electronic/dance band fronted by Yosuke Kotani, with a release on Escalator records. MySpace and Last.fm pages.

3. Avalon is An Israeli instrumental post-rock band in the lines of the Japanese Mono. visit MySpace page for more info. If you're listening to them and don't want to share this artist's tags, pictures, etc. you can tag them as AVALON (isr) and you'll find the correct ones.

4. A band from Sweden that is currently defunct.

5. Avalon was a Dutch heavy metal band, very popular in the 1980s. They have recently remastered their old work on a 2CD release, entitled The Last Move. Although this cd includes some new songs, there is nothing known of a comeback tour or new record. Band members include Dutch musical talent Jack Pisters (S.C.A.R., Anouk, Soylent Green, Ayreon, etc), who is mostly responsible for the remastered works.

6. Avalon, from England, is a nationalist rock band with several albums to their credit.

7. Avalon is a sideproject of Richie Zito

9. Avalon is also the name of a German band who do traditional Irish folk.

12. Avalon is the Psytrance composer Leon Kane, he releases his tunes through the UK label NANO Records. Leon Avalon is currently one of the biggest up and coming names on the international psytrance circuit. Avalon's rip-roaring full-on, melodic, driving, yet surprisingly hard-hitting and evocative sound, is totally unique and has been tried and tested with huge success on dancefloors worldwide.

Avalon has been tearing it up at parties in over 20 countries over the past year, at events including Glade 2009 (UK), Tribe 8 Anos, Universo Paralello 10, (Brazil) Burning man 09 (US), Origin 2010 (South Africa) as well as at some of the largest festivals and club nights across Europe, Japan and Australia. Whilst making incredible leaps and bounds with his solo production and DJing, he has also been remixed by and invited to work with some of the biggest names in the scene, forming recent collaborations with Zen mechanics, Cosmosis, Burn In noise, Lucas, Waio, Logica, Dickster and Tristan.

Recent releases Include his debut album on Nano records, ?Distant Futures,' and latest ep ?Session one' all Gaining top ten and number 1 slots on beatport . Stay tuned for more future releases on top labels such as Nano, Neurobiotic, Alchemy and Tipworld.

13. Avalon is a new band from Sweden. They can be found at http://www.avalonmusic.se/