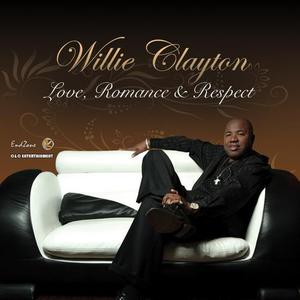 Willie Clayton is an American singer-songwriter and producer. Like several African American singer/songwriters, he began performing gospel music in church as a youngster and then moved into the secular field as a lyricist, producer, and singer. An active recording artist since the early 1970s, Clayton's career has endured almost 40 years and has spanned a repertoire in the styles of R&B, soul, and gospel.

Birthed into an era of soul and R&B legends, a time when music was pure, lyrics had meaning, Willie Clayton is now one the few working artist of his contemporaries. Since the 1970's he's been crooning with the likes of Ron Isley, Bobby Womack, Sam Cooke and Marvin Gaye, yet now he stands nearly alone, facing a new generation.

Born in the Deep South (Indianola, Mississippi) during the days of segregation, Clayton, unable to find proper management or the success he sought moved to Chicago in 1971. Like many other African American artists in the 1970's, the young singer contracted to Hi Records in Memphis, where he worked with producer Willie Mitchell and the vaunted Hi rhythm section. Hi issued a series of fine Clayton efforts on its Pawn subsidiary, including "I Must Be Losin' You," "It's Time You Made Up Your Mind," and "Baby You're Ready," but none of them hit. Finally, in 1984, Clayton enjoyed a taste of soul success when his "Tell Me" (produced by General Crook) and "What a Way to Put It" scored on to the R&B charts. Let's Get Together, Clayton's 1993 album for Johnny Vincent's Ace record label, was a smooth soul-blues hybrid dominated by originals but titled after Al Green's immortal hit. Simply Beautiful, his Ace follow-up, found Clayton mixing dusties by Rev. Al and Aretha Franklin, with his own style.

Back on the scene, after his mainstream success with ?Boom Boom Boom? and ?A Woman Knows? which landed on Billboard's album and singles charts. Clayton is prepared to teach a new generation the right way to love. Self classified as an all encompassing singer, he refuses to be pigeonholed in one genre of music. ?There aren't many real gritty R&B singers?. Bobby Womack, Charlie Wilson, Ronald Isley and I are the last of that generation. I keep up with the music because I have to change with the times. Where Gerald Levert left off, I am picking it up, and like him, my music is relatable across the generations.?

His newest release, ?Love, Romance & Respect? released in stores nationally November 24, 2009 will take you back to the days of classic R&B, with a 2009 sound. Working with young accredited musicians and producers, (all under the age of 30) has allowed Clayton to speak the language of love to modern rhythm and blues. Grateful for the young energy, the expertise and perspective, he feels this project is his best recording yet.
?It's not a one single album, it's grown and sexy. It's about bringing romance, love, respect and sensuality back home. ?

The first single ?Dance The Nite Away? has the urban adult audience dancing across the country. Peaking Top 25 on the Mediabase Urban Adult Chart and debuting on Billboard's R&B/Hip-Hop Chart, Willie Clayton is the artist that consistently gives pure R&B to the Urban Adult consumer.
With multiple releases throughout his career, Clayton is confident in his newest offering to the world, even reaching generation next, by building an internet presence and bridging the generational gap. ?Mood music has no age limits, this album reminds you how good it is to be in love and shows you how sweet it can be!?

Considered by critics and fans alike to be one of the last great "Soul" men, Clayton continues to record and perform, and has maintained a devoted following throughout the world.

Crossroad Of The Blues

I Am Rhythm & Blues

If Your Loving Wasn’t Good Enough To Keep Me…