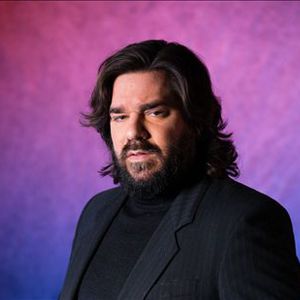 Matt Berry (born 1974 in Bromham, Bedfordshire) is a British actor, writer and musician known for his deep, booming voice and a grand, rather rogueish but charming manner. He first appeared on British television in the comedy series Garth Marenghi's Darkplace, where he portrayed the dual role of fictional '80s actor Todd Rivers who plays the part of Dr. Lucien Sanchez in the main body of the show.

He first appeared on British television in the comedy series Garth Marenghi's Darkplace, where he portrayed the dual role of fictional '80s actor Todd Rivers who plays the part of Dr. Lucien Sanchez in the main body of the show.

Berry then assisted as an antiques expert in the ITV sketch show Monkey Trousers with Vic and Bob and Steve Coogan.

He then went on to appear in the first season of The Mighty Boosh as Dixon Bainbridge, the eccentric, sinister tycoon/explorer and nemesis of Howard Moon. Berry first met The Mighty Boosh whilst performing at the Hen and Chickens theatre bar where they were resident in 2000 but, it was during the filming of the series that Berry met Rich Fulcher, who co-starred on Boosh as Bainbridge's lackey, Bob Fossil. They proceeded to star in their own comedy show Snuff Box on BBC Three. Berry can be seen in a small cameo performance in the "The Mighty Boosh Live" DVD.

Berry also appears as a recurring character on The IT Crowd from series 2 onward.

As a musician, he composed all of the music for Snuff Box, as well the music for AD/BC: A Rock Opera, which he co-wrote with Richard Ayoade. This program was a half-hour parody of overblown musicals in general and Jesus Christ Superstar in particular, telling the story of the innkeeper who allowed Mary, Joseph and the baby Jesus to sleep in his manger which featured Fulcher and The Mighty Boosh's stars, Julian Barratt and Noel Fielding. Berry has also composed music for the BBC 2 Steve Coogan comedy Saxondale and the theme song for the Channel 4 sketch show Blunder.

He has released two albums: "Jackpot" in 1995 (under the alias 'Jeffrey Porksmith'), and "Opium" in 2005. He is to tour the latter album and other songs in early 2007. Presently he is producing and collaborating on new material with the Motown legend Geno Washington, who appeared with him onstage at the Bloomsbury theatre in May 2007. The tour is also set to continue in the latter part of the year.

In October/November 2006, Berry joined his Garth Marenghi colleagues in the Garth Marenghi spin off Man to Man with Dean Learner for 3 out of the 6 episodes in the series.