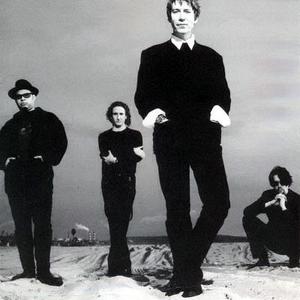 ''I've always thought of Love Spit Love as being a long-term thing, it was never a side project, The Psychedelic Furs are long gone,'' says Richard Butler. And Love Spit Love have powerfully returned with a second album and their first for Maverick. (Edit: 2/4/2010: Love Spit Love is sadly also long gone - 13 years gone, in fact. Apparently the long-term intentions were crushed by the reality of hardly anyone knowing about them, Richard's pre-existing claim to fame notwithstanding. LSL was considerably more cerebral and introspective than The Furs.

(Edit: 2/4/2010: Love Spit Love is sadly also long gone - 13 years gone, in fact. Apparently the long-term intentions were crushed by the reality of hardly anyone knowing about them, Richard's pre-existing claim to fame notwithstanding. LSL was considerably more cerebral and introspective than The Furs. Too intelligent for the masses, perhaps, they didn't go on to release anything beyond Trysome Eatone. However, what comes around goes around. The Furs recently regrouped and went on tour in 2009. Intentions unknown as to whether Richard and Co. will be releasing any new material as The Psychedelic Furs.)

Like the band's music, their second album's title "Trysome Eatone" was an invitation both dangerous and alluring. The 12 songs included ''Fall On Tears,'' ''Hurts When I Laugh,'' ''Sweet Thing,'' ''All God's Children,'' ''Well Well Well'' and the LP's debut single and video ''Long Long Time.'' Throughout, the Love Spit Love sound was sharp and moody, blending Butler's unmistakable vocals with the shimmering guitar textures of Richard Fortus and the penetrating rhythm section of drummer Frank Ferrer and new bassist Chris Wilson.

Trysome Eatone was both a union of European and American pop styles and a powerful slice of pre-millennial melancholia and humor. On the album's first single ''Long Long Time,'' Butler waxed philosophical, while the band created a deceptively tempered groove. ''Fall On Tears'' and ''It Hurts When I Laugh'' represent a striking marriage of folk melody and foreboding lyricism, while ''More Than Money'' was a manic celebration of transistorized noise, volcanic rhythm and apocalyptic guitar. In all, Trysome Eatone took pop experimentation to heady new levels.

''I wanted to make a record that had all great songs,'' Butler said, ''Not all singles necessarily, just great songs. I also wanted the record to be varied, with lots of different moods, but make it so it all hung together.''

The album winds its way through Butler's tales and observations about life and everyday situations and confrontations, The inspiration for Butler's lyrics? ''I suppose things that I overhear people say, situations I find myself in,'' he says. ''I kind of like lyrics to be pretty simple-sounding and not impose themselves too much and not try to be clever. Kind of like nursery rhymes that sound innocent but are really pretty dark.''

''Little Fist'', a song written about people on St, Marks Place below his apartment window, opens with the lines:
I've got lipstick on my front teeth I'm full of pills but I don' t feel good yet I 'm tied up running out of good luck Eyeliner tears are running down my neck
''I think all songs are autobiographical; it's always either writing about yourself or putting yourself in someone else's shoes,'' Butler explained. ''Whatever you write about tells something about yourself, Songs can start from a title or a melody or taking words you've already written and squeezing them into a tune. Usually, it starts with the music and a melody. Then the feel of the music puts you in a certain mood; then you have to write lyrics with that mood.''

''I tend not to write love songs,'' he continued. ''They sound too much like somebody cornering you in a bar and moaning about their ex-wife - does anybody really care? But songs about love are a different thing.''

As a founding member of the Psychedelic Furs, Richard Butler has cast a long, folkloric shadow over the modern pop landscape. With Love Spit Love, he tried to tear down his own myth and replace it with a gleaming new creation.

The roots of Love Spit Love extend back to 1992. In the wake of the Psychedelic Furs' dissolution, Butler moved from his native England to New York. Seeking a new platform for his musical and lyrical visions, the singer teamed with Richard Fortus, who had impressed Butler when opening for the Furs with his former band.

On the band's self-titled 1994 debut recording, Butler and his bandmates created lush soundscapes punctuated by dissonant shards of noise and orchestration. In its effusive critique, The Trouser Press Record Guide noted that, ''Butler has never sounded better -- his nicotine-coated growl has, over the years, mellowed into a powerful, scratchy croon that shimmers on his most accessible record since the Furs' glory days.'' Elsewhere, Cover magazine claimed Love Spit Love to be ''both the best new band and the best debut album of 1994.''

Building on the debut disc's momentum, Trysome Eatone painted with broad musical strokes. Recorded in New York, Detroit and Los Angeles, Trysome Eatone is the kind of album that yields fresh surprises with each listen. Yet for all its lyrical insight, the record never reveals too much. Richard Butler remains an enigma, and as the singer himself crooned on ''Long Long Time'':
If I seem to make no sense I make no sense sometimes
It was a perfect lyric from a man who's always known how to engage his fans in a deep mystery.

Love spit love was perhaps most famous for their song "How Soon Is Now?", a cover of The Smiths. The song was used as the theme of the long-running TV show Charmed, and was also used in The Craft soundtrack.