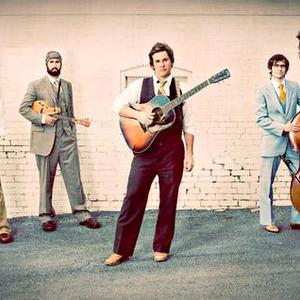 The Steel Wheels are truly an Americana band, rooted in musical styles that explore the territories between blues and bluegrass, old-time sing-alongs and foot-stompin' fiddle tunes. They are subtle innovators who respect the past but whistle their own tunes, layering in rich textures and decidedly modern energy to forge a new sound. They fit best among musicians like Langhorne Slim, Gillian Welch, or Adrienne Young and Little Sadie (with whom they've shared the stage) ? deft musicians making a name for themselves by creating their own particular permutation of traditional forms.

They fit best among musicians like Langhorne Slim, Gillian Welch, or Adrienne Young and Little Sadie (with whom they've shared the stage) ? deft musicians making a name for themselves by creating their own particular permutation of traditional forms. Yet the Steel Wheels share much with new Americana favorites like the Avett Brothers or Old Crow Medicine Show, with charisma that causes toes to tap and heads to nod, audiences hanging on their every word. Like those bands, The Steel Wheels have broad appeal. And they count among their fans former Statler Brother Jimmy Fortune and indie folk darlings Over the Rhine.


The four-piece band is based in the Blue Ridge Mountains of Virginia, where multi-instrumentalist Jay Lapp was born and took inspiration from church hymns and folk fests, and where Trent Wagler has been a scene staple for nearly a decade. Lapp was touring with several successful Midwest bands when he and Wagler crossed paths in Harrisonburg, Virginia, and a musical partnership began. The two are joined by upright bassist Brian Dickel and fiddler Eric Brubaker to form the Steel Wheels. The band shines exceptionally in their live shows, and their palpable chemistry translates easily to Red Wing. Just listen to the exceptional four-part harmonies that support and accentuate Wagler's scratchy tenor, which has been compared to that of Darrel Scott. Brubaker's fiddle, both lively and evocative, suits the band exactly, and Dickel's upright bass grounds the outfit. Jay Lapp's signature mandolin style is remarkable and unmistakable.

The Steel Wheels have built a following from the East Coast to the Midwest and beyond, appearing at Americana festivals such as the Bristol Rhythm & Roots Festival, Floydfest, Folk Alliance, and Appalachian Uprising. Wagler and Lapp also regularly take a duo show to Ireland and have appeared with Peter Rowan at the ?Ards International Guitar Festival.

In keeping with their music that takes a traditional idea on a modern adventure, Wagler and Lapp's organized a week-long, 300-mile bicycle tour last year. Not only did they pedal themselves through the mountains of Virginia to seven gigs in seven days, they hauled their own gear the whole way, with one bicycle custom-framed for travel and another fitted with a trailer. It's one more example that with inherent skill and energy, trust in the value of simplicity and a marked talent for taking something old-fashioned and making it relevant for today is one of The Steel Wheels' greatest strengths.

Wild As We Came Here

Leave Some Things Behind