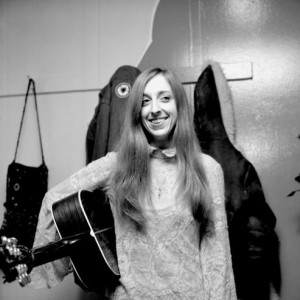 Judee Sill (October 7, 1944 - November 23, 1979) was an American singer-songwriter. The first artist signed to David Geffen's Asylum label, she released two albums before disappearing into obscurity and eventually dying of drug abuse in 1979. Her eponymous debut album was released to major acclaim in 1971 and was followed two years later by Heart Food. She recorded demos for a third album in 1974 and they were released in 2005 under the title Dreams Come True.

Her eponymous debut album was released to major acclaim in 1971 and was followed two years later by Heart Food. She recorded demos for a third album in 1974 and they were released in 2005 under the title Dreams Come True.

Sill was heavily influenced by Bach's metric forms and suites, while lyrically her work drew substantially on Christian themes of rapture and redemption.

Judee's father and brother both died in separate incidents when Judee was quite young. Her mother's subsequent marriage to Tom and Jerry animator Kenneth Muse was marked by heavy drinking, and this, combined with her rebellious nature, drove her away from home and into a life of crime and drug use in her teens.

Having learned her signature gospel-inflected keyboard style during her incarceration for writing bad checks, Sill kicked her heroin addiction and decided to pursue songwriting. Now a talented pianist, organist and guitarist, Sill returned to the West Coast where she encountered Graham Nash and David Crosby (touring with them for a time as their opening act) and David Geffen who offered her a contract with his nascent label. Her albums were received well by critics but found little commercial success. Judee struggled with drug addiction during phases again following a car accident and its resulting physical pain and dropped out of the music scene and died of a drug overdose in November of 1979.

It was through Geffen that she met Graham Nash, who quickly became a fan, and produced the first single for her album, "Jesus Was a Cross Maker." The rest of Judee Sill was orchestrated and produced by Bob Harris, Sill's ex-husband. Judee Sill was released in 1971 to immediate acclaim. Lushly orchestrated, the album featured Sill's voice in multiple overdubs, often in a four-part chorale or fugue. The album fit in well with the light rock/folk-rock underpinnings of what came to be known as the "laurel canyon sound" associated with other female singer-songwriters such as Carole King and Joni Mitchell (Mitchell, also signed to Asylum, was at work on Ladies of the Canyon at the time). A tour as the opening act for Nash and David Crosby exposed her intimate songwriting and skillful guitar playing to a larger audience, but her record failed to make much of an impact, despite the somewhat heavy airplay of "Jesus Was a Cross Maker." A self-professed perfectionist, one song could often take her a year to write, and it wasn't until late 1972 that Sill returned to record and release her second and last album, Heart Food. It too received enthusiastic reviews but did poorly commercially. Sill took over the chores of both orchestrating and arranging Heart Food, with the production relying more heavily on multilayered strings and lush expanse. Unable to draw a sizable crowd yet unwilling to play as a support act, Sill's name and moderate fame both receded, and she disappeared from view entirely. Rumors abound as to what happened next, although it is definitely known that she returned to her heroin addiction as well as becoming heavily involved with cocaine. Graham Nash has said that he learned as early as 1974 that Sill had died of an overdose, a claim that would later prove to be incorrect, but considering how closely the two had worked only a few years earlier it does illustrate just how completely Sill had dropped out by this time.

Her first success was the selling of her song "Lady-O" to The Turtles. Long after her death, she has been lauded by many musicians, including Jim O'Rourke who mixed the posthumous collection of unreleased material, Dreams Come True. Her two original albums have been reissued as a double CD with a number of live recordings and demos as bonus tracks.