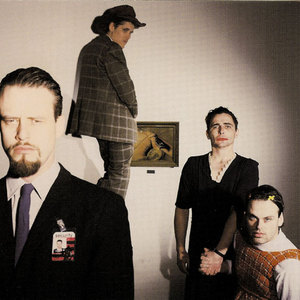 Cows were a noise rock band from Minneapolis, Minnesota, formed in 1987 and disbanded in 1998, notorious for their raucous live performances. The original line-up consisted of lead singer Shannon Selberg, who later took up the bugle, guitarist Thor Eisentrager, bass guitarist Kevin Rutmanis, and drummer Sandris Rutmanis (soon to be replaced by Norm Rogers). The band had a hardcore sound characterized by blurred guitars, however the Cows took the formula a step further, creating a unique and unconventional style.

The original line-up consisted of lead singer Shannon Selberg, who later took up the bugle, guitarist Thor Eisentrager, bass guitarist Kevin Rutmanis, and drummer Sandris Rutmanis (soon to be replaced by Norm Rogers). The band had a hardcore sound characterized by blurred guitars, however the Cows took the formula a step further, creating a unique and unconventional style.

Stripping away anything that remotely resembled pop - including melody and catchy hooks and riffs - the Cows offered punk rock in its crudest form. John Dougan in All Music Guide described the group's distorted sound as "a feral racket that sounded as is if the guitars were being played with metal files". Lyrically, their songs dealt with just about anything, from losers in life to sex and bodily fluids. And Selberg's shrieking vocal style and general lunacy on stage provided the Cows with a bizarre, yet often engaging focus.

In 1987, the Cows released their debut album, Taint Pluribus, Taint Unum, landing a record deal with Amphetamine Reptile for the release of their second LP, Daddy Has A Tail. And by the time Cunning Stunts arrived in 1992, critics began to cite improvements.

However, while the Cows exhibited a more solid playing technique and greater songwriting focus, they stayed true to their punk roots and anti-commercial stance. "We play music that we like", said Eisentrager once. "We know how the world works. We're not trying to make music for mass consumption. Sometimes you get frustrated, but it's all about music. Episodically you get pissed off, but we've had a fair shake with the band, and we've had good tours. Basically we wish more people could get their hands on the records, but we know what we're doing and like what we do. It's not like somebody is trying ... to ignore us. It's just the nature of the beast".

After the release of Orphan's Tragedy in 1994, Roger decided to leave the Cows, fuelling rumors of a breakup. The rumors were silenced, however, with the release of Whorn in 1996. The album featured a new drummer, Freddy Votel.

In the wake of Whorn, talk of a band breakup emerged a second time when Selberg relocated from Minneapolis to New York City. But a new album again served as notice that the Cows were a healthy unit. Released in 1998, the eclectic Sorry In Pig Minor also saw the Cows, for the first time, exploring new ground. Although evidence of the old Cows remained, Sorry In Pig Minor was more varied in scope and texture. The opener, Cabin Man, was vintage Cows, yet tunes like the Latin-flavored El Shiksa and the jazzy Felon Of Troy proved that the group could handle more than punk.

After more than a decade of noise rock, the Cows disbanded in 1998.

They have a star on Minneapolis' First Avenue. Their singer, Shannon Selberg, has gone on with music, fronting the noise rock band The Heroine Sheiks.

Daddy Has A Tail