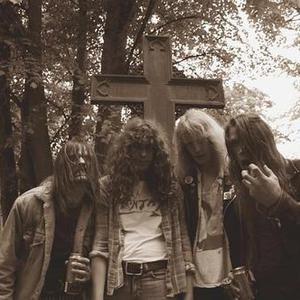 A band from Sweden, playing old school Death Metal, that was formed in 2007. As of now, they have released two demos, "Morbus Chron" in 2009 and "Splendour of Disease" in 2010 and also featured on the Resurrected in Festering Slime-compilation, released by Soulseller Records. Presently signed up with Pulverised records. After publishing two demos and an EP, the young Swede MORBUS CHRON her debut album " Sleepers In The Rift "via Pulverised Records.

To hear it is to raw death metal from a time before the Swedish death metal in the early 90's became more popular - Pre-Swedish Death Metal quasi who with wonderfully nasty riffs and just such a vibe of bands like Afflicted, ABSCESS, AUTOPSY and early DEATH recalls.

While we understand the term Crohn's disease (which is written something different than the band's name) is a chronic intestinal disease that causes pain in the abdomen and diarrhea, which Crohn's disease care but for positive arousal in the auditory cortex, ie, the area in the brain who is responsible for auditory processing. A horny reef chasing the next, Robba singer with a lot of drooling Hall through the often bleak songs and light-looking nest-angled melodies refine this further. The pace is often times also varied within a range of songs and Doompassagen tough to totally cool and uptempo UFFTA parts that make you jump for joy around the area. In the end, it's a matter of taste, but still more rapid passage would have required an even higher rating.

" Sleepers In The Rift "is produced scabby - Recording and mixing took Nicke Andersson (ex-ENTOMBED, ex-Dismember, ex-NIHILIST) was performed, the mastering by Magnus Lindberg of CULT OF LUNA - and sounds every second as if . it was taken more than 20 years of Crohn's disease have made ??them the essence of Death Metal of the first hour in full - and thus stand out among the many bands today are based on old-school sounds, again out positive. " Sleepers In The Rift "is full of dark energy, which inevitably translates to the listener - even if death metal is not even the favored genre. The equally classic, if somewhat Advised very colorful cover artwork by Spanish artist Raul Gonzalez rounds the album off perfectly.

CONCLUSION: Probably the best record in terms of old school Death Metal in this year - the competition will have a hard time, here are a insult to injury.

Sleepers In The Rift