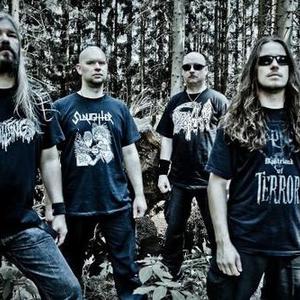 HAIL OF BULLETS were formed at the end of 2006 when guitarist Stephan Geb?di approached singer Martin van Drunen, drummer Ed Warby, bass player Theo van Eekelen and guitarist Paul Baayens with the idea to join forces in an old school death metal band. The band members already knew each other from their previous and present bands like Asphyx, Gorefest, Thanatos, Pestilence and Houwitser. A serious drinking and thinking session followed and the plans for the band's musical direction were laid down that night.

From the start it was crystal clear there was a mutual love for true death metal bands like Autopsy, Massacre, Bolt Thrower, early Death as well as Celtic Frost.

The metal started flowing and within a couple of months they already had enough material written for a full length album. In July 2007 the band decided to record four songs for a promo CD. Swedish death metal guru Dan Swan&ouml; produced the four songs at his Unisound Studios and the result turned out pretty monstrous.

Metal Blade Records didn't hesitate to sign the band and HAIL OF BULLETS' debut album ?...Of Frost And War' was released in May 2008. Apart from the thundering drums, scorching guitars and tormented vocals, the lyrical concept about the battles at the Eastern front during World War II made the album's impact even bigger. The reactions of the press and fans were amazing and the band played countless festival dates and club shows all over Europe.

The debut album was followed by a six-track mini album in July 2009, entitled ?Warsaw Rising' which featured two brand new songs, a cover version of Twisted Sister's ?Destroyer' plus three live tracks recorded at 2008's Party.San Open Air festival. More shows followed and the band even made their first visit to the USA at 2009's Maryland Deathfest.

In the beginning of 2010 the band started work on their second full length album, another massive chunk of war-themed death metal. Singer/lyricist Martin van Drunen managed to come up with a new, intriguing concept. The rise and fall of the Japanese Empire. A new art of warfare where all modern day forces, Navy, Air force and Army were combined together for the very first time in history. Mick Koopman provided the striking artwork, which shows a distinct continuation of the Hail Of Bullets aesthetics. The album was produced by Ed Warby and like before the monstrous mix was in the capable hands of Mr. Swan?.