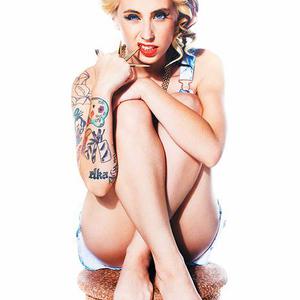 Natassia Zolot, better known by her stage name Kreayshawn, born September 24, 1989 in Oakland, California, United States, is an American hip hop singer-songwriter and up-and-coming music video director who rose to fame in 2011 (but has been active since 2008) with the release of her single, "Gucci Gucci", a rap anthem describing Zolot's disdain for designer labels. According to the Gucci Gucci Songfacts, the video generated nearly three million views in its first three weeks and led to a $1 million recording contract with Columbia Records In June 2011.

The daughter of Elka Zolot, former member of the San Francisco garage-punk band The Trashwomen, Kreayshawn grew up in East Oakland. She attended many high schools but never graduated. She also attended Berkeley Digital Film Institute on scholarship, but never finished the program.

She has directed videos for rapper Lil B, and directed the music video for "The Adventures of Rain Dance Maggie," the first single from the Red Hot Chili Peppers album, "I'm With You", which is due for release on August 30, 2011.

There is also a vinyl and CD (Promo) version of Bumpin Bumpin:
http://www.discogs.com/Kreayshawn-Bumpin-Bumpin/release/2948493