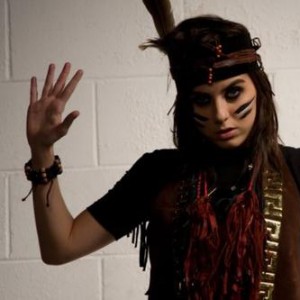 Born Louise Amanda Harman in Wembley, Lady Sovereign was raised on the Chalkhill estate. When she was 13, after having a liking for popular 90s artist, Ms. Dynamite, she started practicing rapping in the mirror with a hair brush. She left school when she was 16 and at the age of 17 she became one of the UK's few white female MCs. She has been cited often as part of the rising British grime scene, and has received outside appreciation from moviegoers for her relation to Rupert Grint. Lady Sovereign cites Ms. Dynamite as an influence.

Career
Lady Sovereign first received attention when she recorded "The Battle", a freestyle girls versus boys battle rap with Shystie, Suz Rock and Frost P. Each rapper who participated in the recording of "The Battle" has since been signed to a record deal.

Shortly afterwards, "Random" was released. This was followed by "9 to 5" which entered the UK Top 40 at number 33. The follow-up single, "Hoodie" - produced by dance act Basement Jaxx - failed to reach the top 40, peaking at number 44. Lady Sovereign has since recorded with Adrock from the American rap group the Beastie Boys and American producer Dr. Luke.

When The Ordinary Boys released the single "Boys Will Be Boys", Lady Sovereign came back with her own reply remix, featuring the music and chorus of the original, but with mostly her own vocals to the tune of "girls will be girls". In May 2006, the favor was returned when she was featured on The Ordinary Boys single, "Nine2Five," a remixed version of her own "9 to 5," credited as "The Ordinary Boys vs Lady Sovereign." "Nine2Five" entered at number 38 in the UK top 40 singles on downloads only, and jumped to #6 upon availability as a CD and 7" vinyl single during the week commencing May 22, 2006. This was her highest chart position to date and has helped to increase the media attention garnered by Lady Sovereign.

Lady Sovereign is the first non-American female to appear on the Def Jam label. Her former lack of success in the UK may be due in part to her stigma as representative of chav culture. She was featured on a Sky One documentary on chavs produced by Julie Burchill, after having been the target of a barrage of abuse and ridicule on the internet forum ChavScum. However, she has a following in the United States and has co-headlined a tour with The Streets, with whom she appeared in a remix for his song "Fit But You Know It." Lady Sovereign's cult following was again boosted after she recorded an attack on singer Jentina with "Sad Ass Strippa," a play on words of Jentina's song "Bad Ass Strippa." Kitty Empire of The Guardian is known to be a fan of "Sad Ass Strippa" and mentioned it in an interview she wrote about Lady Sovereign.

On August 1, 2006, Lady Sovereign's new single "Love Me or Hate Me", a collaboration with American producer Dr. Luke, was aired on the radio for the first time in North America on Flow 93.5 in Canada. The song explains how she is almost the exact inverse of typical female rappers that sell very well, and shows some disgruntlement in pop culture. She explains she doesn't have looks, she can't sing, and can't dance, so love her or hate her. The harmony featured in this song references the Genesis track "I Can't Dance". She is also known for sometimes calling herself a midget (she stands at 5'1, or 152 cm), where she says: "This is officially the biggest midget in the game".

She began an American tour on October 23, 2006 and soon appeared live on CBS-TV's Late Show with David Letterman. On November 18, 2006, it was announced that Lady Sovereign had contracted a throat and chest infection, forcing postponement of her shows in Las Vegas.

As of late 2006, "Love Me or Hate Me" was played in a Verizon Wireless advertisement for the LG Chocolate. It also appears on the Need for Speed: Carbon and Ugly Betty soundtrack, as does "9 to 5" on the latter. On October 17, 2006 "Love Me or Hate Me" became the first video by a British artist to reach #1 on the U.S. (and original) version of MTV's Total Request Live. "Love Me Or Hate Me" was released in the UK on 29 January 2007, with the album following on 5 February 2007.

She has recorded a track for The O.C.'s new album, Music From The O.C. Mix 6 "Covering Our Tracks", where she sings The Sex Pistols' "Pretty Vacant".

On December 31, 2006, Lady Sovereign helped ring in the New Year with a performance of "Love Me Or Hate Me" during the MTV Goes Gold: New Year's Eve 2007 special which aired on MTV.

Sov's full-length Straight Up Cheeky is supposedly coming out early summer, but as for other LS sightings: "Ch-Ching (Cheque 1, 2 Remix)" is on the first major-label grime comp Run The Road, and a 20-minute "FelineMix" has been floating around the p2ps for about a year now.

She returned with her new album Jigsaw which was released on April 7, 2009 on Sov's own label Midget Records.

Those Were The Days