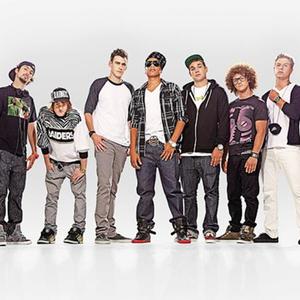 Down With Webster is a six piece hip-hop band from Toronto, Ontario, Canada made up of Patrick Gillett (Pat) on Vocals and Guitar, Martin Seja (Bucky Buck) and Cameron Hunter (Cam) on Vocals, Tyler Armes on Bass and Keyboards, Andrew Martino (Marty) on Drums, and Dave Ferris (Diggy) as DJ. During live shows the band sometimes uses a three piece horn section. Down With Webster formed in Toronto in the late 90's, beginning as a high school talent show jam band. They recently signed with Universal Motown in April 2009.

Down With Webster formed in Toronto in the late 90's, beginning as a high school talent show jam band. They recently signed with Universal Motown in April 2009.

In 2007, after multiple demo releases, they released their self titled album and it was available on the Kill The 8 store, as well as merch.

And in 2008, Down With Webster won the Rogers Mobile/Universal Music best unsigned artist in Canada award, and in 2009 both KISS front man Gene Simmons and Timbaland expressed interest in signing the band to their respective labels. According Timbaland, "That group is the most amazing and creative, innovative group that's going to come out in 2010."

From mid-October 2010 through late November, Down with Webster toured with 3oh!3 on the "Streets of Gold" tour. They gained a large American following during this. After the tour, the boys arrived back to Toronto to finish recording their follow-up album, "Time to Win, Vol. 2" before their own headlining tour, "Wintour 2011".

Party For Your Life (Deluxe Edition)