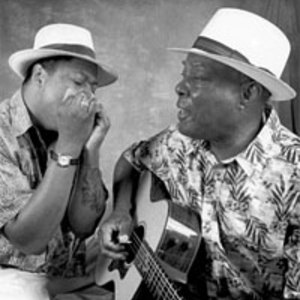 They met at a D.C. folk festival sponsored by the Smithsonian back in 1977, and performed a simple but sweet brand of laid back folk blues, the Piedmont Blues. John Cephas played a unique six string style featuring alternating thumb and finger, with the thumb creating a steady, loping bass line underneath as the melody is simultaneously picked out on the treble strings. Since their first recordings together Living Country Blues and Sweet Bitter Blues, in 1981 for the German L&R label.

they've been official US ambassadors of the blues and toured internationally under auspices of the US State Dept. They've received numerous accolades including the ?W.C. Handy Blues Entertainers of the Year? award and ?Best Traditional Album of the Year? for their album Dog Days of August in 1987. The continued success of more recent releases like Cool Down, Homemade, and 2002's Somebody Told the Truth helped establish Cephas & Wiggins as key figures in the resurgence of interest in country blues,

The Washington Post has declared, "Cephas & Wiggins are giants, weaving Wiggins' harmonica and Cephas' voice and guitar together so seamlessly that one mind seems to govern both mouth and all four arms?a marvelous and essential journey."


Guitarist John Cephas was born in Washington, D.C. in 1930 and died in 2009. Harmonica player Phil Wiggins was nearly a quarter-century his junior, was also born in Washington, D.C. in 1954. The call-and-response interplay between the harmonica and guitar, the complimentary rhythms, and the microtonal slurs generated by ?stretched? guitar strings and ?bent? harmonica notes are all quintessentially African.

Cephas served on the Executive Committee of the National Council for the Traditional Arts, received the National Heritage Fellowship from the National Endowment for the Arts in 1989 and was a founder of the D.C Blues Society.

In 1996, after two successful albums for Flying Fish, Cephas & Wiggins, Alligator Records signed these two guys, who've now been playing together for over three decades.

Somebody Told The Truth

From Richmond To Atlanta