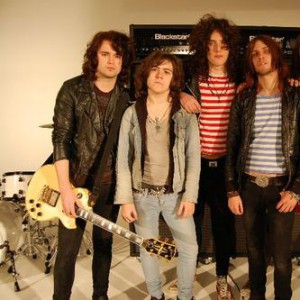 The Treatment were formed in 2008, when founder member drummer Dhani Mansworth was still at school in Cambridge . Although only 15 at the time he already had a clear vision of the kind of band he wanted to form. Having grown up on a diet of ACDC, Led Zeppelin and Aerosmith he began to put the band together under the watchful eye of his father guitarist and manager Laurie Mansworth (More, Airrace, Roadstar).

Having had little success with local musicians he decided to go further afield. First to join the line up was 18 year old Ben Brookland from Tadley he shared the same passion for classic bands as Dhani. Ben's unique guitar style suited the bill perfectly. Soon after came bass player Rick Newman (aka Swoggle) also 15. Rick's enthusiasm and solid bass sound fitted perfectly. Rick suggested that the band audition Tagore Grey his school friend and guitarist from Petersfield. Rick's recommendation was spot on as Tag's guitar style was exactly what they had been looking for. The boys passion for the band was proved when they all packed bags and moved to Cambridge were they shared a home with The Mansworths so they could focus completely on the band and rehearse on a daily basis.

After a 6 month search they found the final piece of the jigsaw. Matt Jones a 17 year old wonder kid hailing from Norwich . His high energy rock vocals was exactly what the guys were looking for. Matt moved to Cambridge within 1 week of joining the band and after locking themselves away to refine their sound, they emerged one year later, they were ready to showcase.

On March 2nd at The Borderline supporting Voodoo Six, Powerage A&R guru Derek Oliver came down to check out the bands set. He was very impressed and immediately signed the band.

They have just finished recording their first album (at Iron Maiden Steve Harris's Barnyard studios). The album was produced by Laurie Mansworth and mixed by Tony Newton of Voodoo six. It will be released in the near future on Powerage records

The Treatment provide the comedy half of THE REAL DANIEl O'DONNELL SHOW, a music and comedy night that just sort of appears every second wednesday of the month at Lowdown @ The Albany, Great Portland Street, London. It's really good. The Treatment are very funny and then there's really amazing alternative live bands on after them. All in all, it's way better than doing something else.