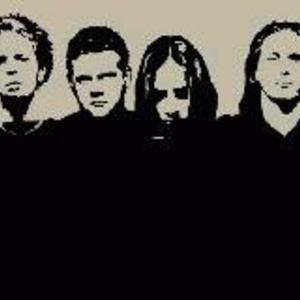 Haji's Kitchen was formed in 1992 or 1993. (There were incarnations before this, but I'll start with the first one that actually played live). It was Eddie Head & Brett Stine on guitar, Derek Blakley on bass, and Clint "Barfight" Barlow on drums. We now needed a name... and here's the story: It was yet another case of a band taking a name due to a lack of superior alternatives. Eddie has an affinity for Indian food, and those that know, know that it has a rather pronounced odor.

Especially when brought into the rehearsal room as leftovers for Sunday Morning Rehearsal (known as "Metal at 12" at the time). Clint walked into the room, where Eddie was consuming his leftover lunch, and said "Damn.. it smells like Haji's Kitchen in here". It shortly thereafter became a joke, and then a band name. I'm mostly sorry it's not a better story, truth be told.

We played a few gigs purely instrumentally, (performing such hits as "The First Progressive Song", "The 7 String Song", "Satan Music" and "The Shuffle Tune"), before borrowing Eddie Ellis from Tommy Lamey to sing on a few tracks. Shortly thereafter, he was dismissed from TL and we picked him up full time. In '94, we parted ways with Clint, and seeing how well raiding Tommy Lamey worked the first time, liberated Rob Stankiewicz from them as well (actually I think it was "Crimeny" instead of TL at that time).

This was the 5 piece lineup that got signed to Shrapnel Records, and released the S/T debut in '95.

For a while, life was good. We attended NAMM, procured various endorsements, gigged, shredded other bands to death and received no royalty or publishing checks whatsoever.

I can't remember when, but somewhere along the way Brett decided rock & shred guitar were gay, and left the band to learn jazz guitar & sax. It was an amicable parting of ways, with Brett first taking it upon himself to procure a replacement for us in the form of his older brother Scott (also from Tommy Lamey/Crimeny).

A few months into gigging to support that disc we started receiving complaints that nobody could track it down to actually buy it. This was because the initial U.S. pressing of 5,000 units had sold out, and head Shrapnel guy Mike Varney, (in his *infinite* wisdom), refused to print more discs. This was a completely unforeseen and extremely frustrating event, which resulted in our requesting that Shrapnel *not* pick up the optional 2nd or 3rd discs provided for in our contract. Shrapnel graciously granted our request, and we were on our own.

If you're looking for this first disc, places like eBay & Amazon's partner program are unfortunately your only option. It's not available for legal download anywhere at the moment.

A couple of years later, another lineup change was due. We started having reliability problems and creative differences with Eddie Ellis. After he failed to show up for a gig, leaving us to do a show in Lubbock purely instrumentally, he was given "The Boot". Anyone having any updates on Eddie Ellis, should let us know. Neither we nor any of his family have heard from/about him in years.

After a short trial, Vince Mullins was hired on vocals to replace Ellis.

I think the next great event in Haji history, was the theft of almost all our gear from our rehearsal room. Guitar & bass amp rigs, cymbals & drum hardware, PA gear, (thankfully no guitars, basses or drum shells), all vanished. I think this was the last straw for Scott, who left the band shortly thereafter. We did our own investigation, found who did it and gave the culprits to the Carrollton police on a silver platter, but they were still unable to prosecute. (F'in incompetents... our tax dollars takin 5 for a donut break)

As we weren't shredding near as much anymore, we decided to skip hiring a replacement guitarist and just stay a 4 piece. (That's Eddie, Derek, Rob & Vince if you've lost track)

This was the lineup that recorded & released 2001's "Sucker Punch" on local independent "M Records". SP is available in pressed disc form in limited quantities on CDBaby.com, as well as digital downloads on cdbaby, itunes, amazon & most other online digital retailers.

With the material on that disc and subsequent writing efforts, we came close to signing deals with a few different major labels, but nothing ever quite panned out for us.

We did manage to get 2 songs ("Lost" and "Day After Day") on the "Broly" Dragonball Z dvd.

In '04, mainly due to his inability/unwillingness to do any substantial out of town gigging, we gave Vinnie "The Boot".

So... we were without a singer, and the band remained so for a long time. There were a couple of efforts to get the ball rolling along again over the years, but nothing really substantial happened until original guitarist Brett Stine called Derek and said "I'm pissed off, and want to play some METAL! Working out to Chick Corea & the Elektrik band isn't getting me pumped up enough!" Eddie & Rob jumped on board shortly thereafter and rehearsals resumed in 2010.
The singer problem, however, was still rearing it's ugly head. We started with the idea of getting some of our friends from other local bands to fill out the disc, and having multiple vocalists share the work. Shortly after that, a UK band Derek had been following on MySpace for some time called "TesseracT" found a new singer and began to tour to help attract a record deal. Derek saw a few bootleg videos of their shows in Russia and was completely blown away. He decided to cold-call (Facebook e-mail) their singer, Daniel Tompkins, to see if he'd be interested. Daniel took it upon himself to buy Sucker Punch on itunes and listened to some of the other songs we were working on, and responded YES!

After Daniel did his first couple of tracks, the idea of using anyone else quickly became less appealing. We had really hoped to find someone locally to facilitate easier gigging, but after a few more months with no luck, we offered the full band position to Daniel. He was thrilled, and so were we when he accepted. So... Haji's Kitchen.. from Dallas, TX & Nottingham, UK at your service!

So... "Where Are They Now" you ask? Where'd the other guys go? Who's actually in the band right now? Why should we care?

Original vocalist Eddie Ellis? We have no news. His relatives have no news. If you've seen Eddie in the past 10 years, please drop us a line so we can forward the info to his family. Thanks!

2nd vocalist Vince Mullins? Living in east Texas with his wife Linda & their two kids. Currently sings for "Half Life".

Guitarist Scott Stine? Also living the happily married family life. He's director of music at his church, and still shreds from time to time. He's got his own site at www.scottstine.com

Eddie Head? Probably at work right now.. he's Chief Strategy Officer of travel club WorldVentures. He may also be on a dirt cheap vacation with with his wife Jessica courtesy of said company. If he's not doing one of those two things, he's probably at the gym.

Rob Stankiewicz? Rob is on a mission to visit every national park in the United States. Day gig? Video filming & editing for WorldVentures.

Derek Blakley? Volunteering at his local Big Cat Sanctuary (www.bigcatcare.org), sampling many many brands of premium imported Vodka (preferably Russian) and attending as many Dallas Stars games as possible.

That's all for now.. updates as events warrant.