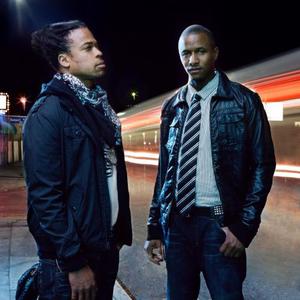 Zion I is a hip hop duo from Oakland, California, USA, consisting of producer/DJ, Amplive and MC Zumbi. The group is known to its followers for Amp's futuristic production techniques, using a mix of live instrumentation and samples, and Zumbi's positive and socially conscious lyrics. Zion I debuted in 1997 with the locally distributed cassette-only EP Enter the Woods. Their first single on Indie label Ground Control Records ("Inner Light") paved the way for an album deal and in 2000, they released the critically acclaimed Mind Over Matter.

After signing with independent label Ground Control Records, the duo released their debut single "Inner Light" in 1998, along with their debut EP Starship. In 1999, they released their next single "Critical" featuring Planet Asia, and another EP, Chapter 4. Their debut album Mind Over Matter finally surfaced in 2000. The effort was one of the most critically acclaimed underground albums of the year, and was nominated for Independent Album of the Year by The Source Magazine. AmpLive's futuristic production techniques and Zumbi's strong and substantial lyrical content were a major hit with underground Hip Hop fans.

Zion I recorded a second album titled Deep Water Slang, set for release in 2002, but their label went under and the album disappeared. They prepared a second version, Deep Water Slang V2.0, which was released in early 2003. Music videos were shot for the songs "The Drill", "Finger Paint", "Boom Bip" and "Le Le Le", giving them the most exposure of their career. Zion I started their own record label, Live Up Records, in 2003, and released a mixtape titled Curb Servin. In 2004, the duo released a compilation titled Politicks, and another mixtape, Family Business, which served as a prelude to their anticipated third album. They were featured along with Del tha Funkee Homosapien and Haiku D'Etat on the CD/DVD Calicomm 2004.

True & Livin' was released in early 2005, featuring guest appearances from popular underground artists like Talib Kweli, Aesop Rock, Del tha Funkee Homosapien and Gift of Gab. The album featured the single "The Bay," became a West Coast/College Radio hit, and featured a music video. The remix of "The Bay" earned the group its first significant commercial radio play in the San Francisco Bay area. The remix, and later projects, represent a concerted effort to reach hyphy audiences, by collaborating with artists such as Turf Talk, San Quinn, and Mistah F.A.B..

The duo's fifth album is a collaboration project with Living Legends member The Grouch, titled Heroes in the City of Dope, and was released on October 10, 2006. This fifth album was again highly critically acclaimed, and gained the talented band more artistic respect.

Their song "Spinning" was included in the soundtrack of the movie Grandma's Boy.

The Sun Moon And Stars (EP)

The Masters Of Ceremony (EP)