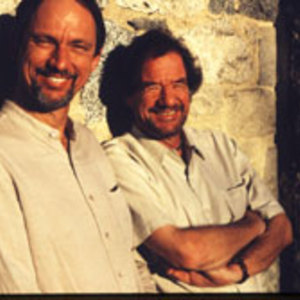 Willie & Lobo is a 'World Music' musical duo that comprised of Willie Royal (violin) and Wolfgang Fink, also known as Lobo (guitar). Meeting in 1983, Willie & Lobo produced 10 albums before disbanding in early 2007. The duo got back together in 2011. "Zambra" is a Gypsy word meaning a gathering of musical merriment and it is also a dance done by the women of Spain. Willie and Lobo create this atmosphere with their tenth career album featuring their signature sound of Gypsy Boogaloo violin and flamenco guitar.

"Zambra" is a Gypsy word meaning a gathering of musical merriment and it is also a dance done by the women of Spain. Willie and Lobo create this atmosphere with their tenth career album featuring their signature sound of Gypsy Boogaloo violin and flamenco guitar. Produced and co-written with featured songs and performances by famed trumpeter Rick Braun, ZAMBRA marks their fifth creative collaboration together.

?Working with Rick on the album was a fantastic experience, it just felt right," muses Royal, "besides having a total blast in the studio he's always inspiring us in new ways." Braun adds, "We first worked together on GYPSY BOOGALOO. They were crazy enough to trust me as their producer even though it was my first production. That was the start of many years of friendship and a wonderfully creative journey together."

Besides a rare musical freshness and authenticity, the approach Willie and Lobo took to recording ZAMBRA captured a great deal of emotion. Perhaps more than others, Balada Para Katrina demonstrates this most clearly, as this album began its studio birth within hours of the north Gulf Coast devastation wreaked by the hurricane. Mama Mia shows off what they describe as "the spontaneous combustion" of the session. The tune starts with Royal's rough-hewn violin on a slowly simmering melody made for whistling. But, the song morphs into an all-out jam session, propelled by Lobo's rhythm guitar and percussion. In fact, Lobo takes center stage on a few solo tunes, including the closer, El Payo. "Lobo's solo is the best performance I've ever heard him record to date," beams Royal. On the title track Zambra, Willie and Lobo takes the listener on a Middle Eastern journey with an intense passion that's all their own. Braun declares that these two are "World-wise gypsies with an unparalleled musical voice that draws on influences from every corner of the globe."

The pair, over the course of recording 10 albums, have put much of their lives and experiences into music. Willie Royal was born in El Paso, Texas, as the son of an Air Force lieutenant colonel, and was raised in such exotic locales as Turkey, Germany, France, and Florida. He began his classical violin lessons at the age of eight, and became so proficient that he became concertmaster of his high school orchestra. Inspired by rock 'n' roll ? as well as the violin-fueled fusion of Jean-Luc Ponty, Stephane Grappelli, and It's A Beautiful Day ? Royal rebelled against his formal training and started playing country-rock fiddle in a popular Florida-based band, while occasionally sitting in with Gregg Allman and Dickey Betts of the legendary Allman Brothers Band. Willie continued to absorb diverse musical styles ? reggae, jazz, salsa ? and soon set out on the road, playing in Europe, Canada, Brazil, and New Zealand, before settling in sunny Mexico in the early '80s.

Wolfgang "Lobo" Fink was born in the tiny Bavarian village of Teisendorf, halfway around the world from his musical partner. The 18-year-old Lobo first picked up his chosen instrument while serving as a signalman in the German navy. After hearing an album by gypsy guitarist Manitas de Plata, the young mariner discovered his affinity for the romantic, rhythmic music. After completing his term of service, he searched out de Plata, ultimately finding the guitarist residing in a gypsy camp in Southern France. Lobo spent a while with de Plata and his people, hanging out and absorbing the music.

Upon his return to Germany, Lobo formed Lailo, a flamenco group which toured Europe for three years and did much to popularize the modern gypsy sound. Longing for new ways to express himself, Lobo journeyed to the famous caves of Sacromonte in Granada, Spain, to spend a year living and studying with the gypsies. In 1980, he headed to Mexico and began working as a solo act.

Willie and Lobo's first fateful meeting came in 1983, when the two musicians were both working at Mama Mia's restaurant in the colonial town of San Miguel de Allende in Mexico. Willie was playing fiddle with a local salsa combo, while Lobo played solo flamenco guitar on the patio. Though they jammed occasionally, Willie and Lobo were still searching for their individual sound, recording a number of solo albums before finally uniting in 1990 in Puerto Vallarta. They soon made a live recording of a swinging Willie and Lobo set, which they dubbed PLAYING HARD.

Willie and Lobo's increasing popularity and musicality led to their involvement in the soundtrack to the 1995 independent film, Shadow of the Pepper Tree. In addition, their music played a prominent role in the 1997 film, Fuochi d'artifico, produced by Vittorio and Rita Cecchi Gori (Il Postino, Mediterraneo, Johnny Stecchino), and was used as accompaniment by Ukrainian skater Yulia Lavrenchuk at the 1999 World Figure Skating Championships in Helsinki, Finland.

When not touring or recording, Willie and Lobo are likely to be found catching a wave near their homes, Willie on the West Coast of Florida and Lobo on the Mexican coast. These two rockin' surfin' gypsy dudes have had their music used in the surfing documentary, Blazing Longboards, and continue to name songs after their favorite surfing spots.

The duo got back together in 2011 and undertook a tour.
www.willieandlobo.com