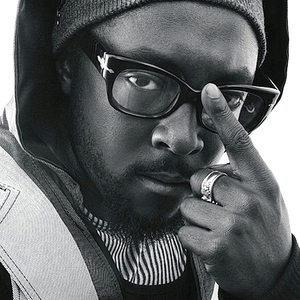 William James Adams Jr. (born March 15, 1975), better known as will.i.am, is an American hip-hop musician and founding member of The Black Eyed Peas. Adams is of Jamaican descent. When William was 16 years old, he started rapping in late 1991 under the name "Will-1X" after being discovered by Compton rapper and former N.W.A. leader Eazy-E and signed a deal to Eazy's Ruthless Records. will.i.am's first rap song was "Merry Muthafuckin' Xmas" from Eazy-E's 1992 EP 5150: Home 4 tha Sick.

When William was 16 years old, he started rapping in late 1991 under the name "Will-1X" after being discovered by Compton rapper and former N.W.A. leader Eazy-E and signed a deal to Eazy's Ruthless Records. will.i.am's first rap song was "Merry Muthafuckin' Xmas" from Eazy-E's 1992 EP 5150: Home 4 tha Sick. Shortly after Eazy-E's death in 1995, Will left Ruthless to start a group that would later be called The Black Eyed Peas.

Will.i.am has recently been cast as John Wraith in the upcoming X-Men Origins: Wolverine, a prequel to the X-Men film series

And if you enjoyed Madagascar 2's chunky hippo, Moto Moto, you should know that the deep voice belongs to yours truly, will. i. am. after he was ''pimped'' out to the directors by his musical friend, Justin Timberlake.

Before joining the Black Eyed Peas, Will.i.am attended the Fashion Institute of Design & Merchandising in Los Angeles. In 2001, he began designing his own signature clothing line, i.am, which made its official debut in 2005 at the Magic apparel trade show in Las Vegas. In 2007, Will.i.am teamed up with Blue Holdings to design a premium denim collection, i.am Antik, that is scheduled to debut in August of 2007 at the Project Show in Las Vegas. He has also designed clothing for the Black Eyed Peas.

In January 2008, will.i.am wrote a song, "Yes We Can", in support of the 2008 U.S. presidential campaign of Barack Obama, which in turn became a music video directed by Jesse Dylan. The lyrics of the song are composed almost entirely of excerpts from Obama's speech on January 8, 2008, following the New Hampshire presidential primary election. The video features appearances from numerous celebrities like Scarlett Johansson, Tatyana Ali, John Legend, Herbie Hancock, Kate Walsh, Kareem Abdul Jabbar, Adam Rodriguez, Kelly Hu, Hill Harper, Amber Valletta, Eric Balfour, Aisha Tyler, Nicole Scherzinger, Nick Cannon, Bryan Greenberg, Common and first appeared on the website for Dipdive, and within a week of its appearance racked up three million views, and over four million views on Youtube.

On February 29, 2008, a second video, "We Are The Ones" was released on Dipdive and YouTube. Including cameo appearances from Jessica Alba, Ryan Phillippe, Kerry Washington, John Leguizamo, Regina King, Tyrese Gibson, Eric Mabius, Tichina Arnold, Adrienne Palicki, comedian George Lopez, and singers Macy Gray, Zoe Kravitz and Black Eyed Peas' Taboo, the video features everyone chanting "O-BA-MA" as a portrayal as their hopes and wishes for Obama and his presidential campaign.