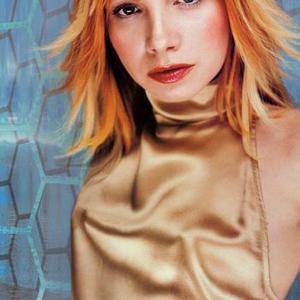 Colleen Ann Fitzpatrick (born July 20, 1972 in Old Bridge, New Jersey) is an American pop music artist, dancer and actress, better known by her stage name, Vitamin C. Her hits include "Smile", "Me, Myself, and I", "As Long As You're Loving Me", "Graduation (Friends Forever)" (which reached #38 on the Billboard Hot 100), "The Itch" and "Vacation" (from the Pokemon Pikachu's Vacation soundtrack). Fitzpatrick made her first musical outing as the lead singer of pop punk band Eve's Plum, who got a record deal with Epic Records in 1992.

Fitzpatrick made her first musical outing as the lead singer of pop punk band Eve's Plum, who got a record deal with Epic Records in 1992. The band released 2 albums and 7 singles between 1993 and 1995 before being dropped by their label for failing to achieve any mainstream success. The band continued to play together until 1998. Immediately following, Fitzpatrick took interest in a dance/pop musical project she dubbed Vitamin C. She shopped demos she recorded for a while and found herself with an album deal from Elektra Records. Her first album, Vitamin C, peaked on the Billboard 200 at number 29. The album's first single, "Smile," climbed to number 18 on the Hot 100. While the 2nd single "Me, Myself & I" failed to chart, the 3rd single "Graduation (Friends Forever)" made a huge impact on radio, though only peaking at #12 on the Top 40 Mainstream Chart and #38 on the Hot 100. The song is considered a landmark in graduation themed songs and is still hugely popular amongst graduation parties and ceremonies. It has appeared on the iTunes Music Chart at the end of every school year since the chart's inception.

In late 2000, Mattel released a Vitamin C Doll and Fitzpatrick released "The Itch," the first single from her second album. Though the song received some dance/club airplay, it stalled on the Hot 100 at number 45. After the album debuted at a disappointing #122 on the Billboard 200, Elektra Records released the second single "As Long As You're Loving Me" with almost no promotion. The song failed to chart in the US, thus the planned third single "I Know What Boys Like" was scrapped and Fitzpatrick was dropped from Elektra Records.

Colleen also starred as Debbie Harry's daughter Amber Von Tussle in the original "Hairspray" motion picture. She was ranked #76 on the Maxim Hot 100 Women of 2001. She has her own lipstick color developed after her signature red-orange and blonde hair.

According to the Graduation (Friends Forever) Songfacts, since her brief period of fame Colleen has since used her Tween-pop songwriting powers to work on songs for Hannah Montana, Demi Lovato and Selena Gomez .