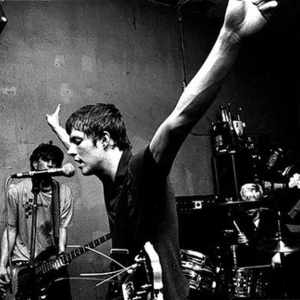 Unwound was a U.S. post-hardcore band based in Tumwater/Olympia, Washington. Formed in 1991, the band, originally known as Giant Henry, consisted of Justin Trosper (vocals, guitar, songwriting), Vern Rumsey (bass), and Brandt Sandeno (drums). Unwound released a full demo tape in 1991, and recorded a mini-album in early 1992 (released as Unwound in 1995 by Honey Bear Records). Two songs from the demo tape later appeared on A Single History: 1991-1997.

In July 1992 Sara Lund replaced her friend Sandeno. The group released several singles and albums, primarily on the Kill Rock Stars label, before disbanding on April 1, 2002, shortly after co-headlining that year's All Tomorrow's Parties festival. The fact that they broke up on April Fool's Day fueled speculation that they would, in actuality, remain together; an early band t-shirt had the inscription "Unwound 1991-2091". Unwound's Fake Train was the first full-length musical release on Kill Rock Stars; it had been strictly a spoken-word label until its owner Slim Moon attended an Unwound concert and decided he had to release their upcoming debut (though technically second) album. Unwound also had the maiden releases for several other key underground record labels, including Gravity Records and Troubleman Unlimited Records; side project Replikants had the first release on 5 Rue Christine, an esoteric KRS offshoot. Rumsey founded and ran Punk In My Vitamins? Records, releasing material by Lowercase, Yind, the Bangs, Karp, and Chokebore. Trosper published several issues of his own underground rock fanzine in the early 1990s. Unwound and sonic/geographic contemporaries Sleater-Kinney were generally considered KRS's flagship bands of the 1990s; no other band released anywhere near as much material on KRS as these two did.

Unwound's main influences included Sonic Youth, Fugazi, Big Black, The Wipers, Black Flag, Rapeman, Pixies, Can, Mission of Burma, H&uuml;sker D&uuml;, Nation of Ulysses, Spacemen 3, Loop, Flipper, and Gang of Four. Evidence of the Black Flag influence can be seen in Trosper & Sandeno's early band named The Young Ginns (named after B.F. guitarist/songwriter Greg Ginn), and in their sample of Black Flag's lyric "I'm not a machine" in their song "Machine" (on Replikants' debut album). Trosper was also in a band called Worst Case Scenario. Unwound's early work was characterized by intense vocals, jagged guitar lines, and more complex drumming than the band's peers. Trosper's lyrics were highly existential, cryptic, and generally bleak. For this reason, they are generally considered one of the founding fathers of the genre later called "screamo." From this angular, atonal starting point, the band developed their signature sound over the course of several albums and numerous singles. With 1996's Repetition, Unwound added synthesizers to the mix. Free-jazz style saxophone found its way onto 1998's Challenge For A Civilized Society. The band recorded Peel sessions with John Peel at the BBC in 1998; these were broadcast over the radio, and were released as the semi-official bootleg Unwound - Live in London on (Love Letter). This new direction set a precedent that the band would follow for their remaining albums, culminating in the release of 2001's lush Leaves Turn Inside You, a double album the band recorded themselves over the course of two years. Unwound never covered any other artists' songs on their albums, though they did cover songs by The Minutemen and Flower on singles.

The band was known for its nonstop touring of the U.S. and Europe, and occasionally Japan. It shared stages over the years with the likes of the following, with earliest known date in parentheses: Sonic Youth ('95), Polvo ('95), Fugazi ('95), Hovercraft (European tour w/ them, '96), Lowercase, Polar Goldie Cats, Deerhoof ('98), Mogwai ('99), Nirvana, Slug (rock band, not rap group), the Peechees ('98), Clikatat Ikatowi (approx. '94), Chokebore, The Most Secret Method ('99), Yind ('99), Blonde Redhead ('95), Dub Narcotic Sound System, xbxrx (who formed after attending an Unwound concert in Biloxi, MS, in 1998) (2001), Bikini Kill, and many more. (Members of Unwound and Yind occasionally performed live as "avant-Norge" "supergroup" Shag Bath.) Unwound utilized two additional guitarists during live performances on its final (2001-02) tour.

The band was known for having an all-ages policy at almost every concert which it headlined. This meant that they would often choose to play at unconventional locations such as basements, jaycee halls, and college auditoriums, rather than at the traditional 18+ or 21+ (alcohol-serving) music clubs. They did this because they frequented all-ages shows in Olympia as teens, so they wanted to let fans of any age attend their own gigs.

Unwound had two main side projects, each self-styled as highly conceptual and distinct from the parent band.

Trosper and Sandeno, who have collaborated musically since the mid-'80s, helmed an experimental venture called Replikants. (Not to be confused with the band Replicants, which featured members of Failure and Tool.) Early on, they each acted as multi-instrumentalists for the group. Inspired by John Cage, Can, and Miles Davis, they combined jazz, ambient music, tape loops, musique concrete and vocal samples atop a krautrock-propelled base. Debut album This Is Our Message (1997) consisted of home recordings from 1994 to 1996. (CD version contained ten bonus tracks not included on the vinyl version due to time constraints.) They were fleshed out to a full band (featuring Joe Plummer of Bare Minimum/ Black Heart Procession on drums), with more of an electro-rock sound, on their second and final album (Slickaphonics, 1999). A tour ensued, beginning that summer; after it, Trosper shelved Replikants to focus his energy on finishing Unwound's next (final) album.

Rumsey and friend Greg Allen recorded as enigmatic New Romantic-styled pop band Long Hind Legs in the 1990s. Rumsey used the pseudonym "Wolfgang" and Allen used the alias "Paul," with only astute Unwound fans aware of their real identities. Following a slew of singles, their debut self-titled album came out in 1997 on Kill Rock Stars. The 12" EP "Open Wide" (+ remixes)/ "Alphabets Of Unreason" was released simultaneously. Atop peppy, carnival-esque backing music, "Alphabets Of Unreason" features the odd lyrics, "Atoms, boys' cars, dead-end fags/ God, his image, and Jerry's Kids/ Love-making noon orgies/ I want to kill, I want to kill.../ Pills, quinine reveries... Scornful tramps, unwitting vamps, wasted xenophobes & all the young zeroes/ I want to kill, I want to kill..." (Note the first letter of each of the main words in the verses, then refer back to the song title.) The February 4th - 14th, 1998 EP was released in 1998 on Kill Rock Stars.

Members of Unwound vowed to continue creating music after the spilt, the first result of this being Vern Rumsey's 7" single under the alias Red Rumsey. (The name being a reference to the "REDRUM" scene in the novel/movie The Shining.) The single consists of two melodic folk-rock tracks, and was limited to 500 copies. Trosper and Rumsey work as record producers. Rumsey also works as a web designer. A DVD of footage from Unwound's final tour (2001-02) has been in the works for several years, as has a CD of rare recordings. Sarah Lund recently participated as one of the 77 drummers in the Boredoms performance "77 BOADRUM" which occurred on July 7th, 2007 at the Brooklyn Bridge Park, New York.

* The working title of the Unwound album was Rat Conspiracy.

* Fake Train's cover art is simply a defiled copy of a Tom Jones LP cover which had been hanging over Trosper's doorway. The cover and inner artwork of The Future of What are illustrations by Russian constructivist artist Iakov Chernikhov (1889-1951). A photo of Boston's stained-glass Mapparium adorns the cover of Challenge For A Civilized Society. Coincidentally, a similar photo of the Mapparium appeared on the cover of National Geographic magazine a month after Challenge was released.

* At the premiere of the 1997 theatrical re-release of Star Wars, Mark Hamill (Luke Skywalker)'s son was photographed in an Unwound t-shirt.

* Dustin (aka "Dirty"), the group's main roadie, was often considered the band's unofficial fourth member. He has also contributed to their liner notes.

* LP versions of Unwound's albums generally came with elaborate additional artwork/lyric sheets that the CD versions lack; the sheets can also be obtained by writing to Kill Rock Stars Records.

* Unwound were scheduled to play at the Middle East Downstairs in Cambridge, MA, on the evening of September 11th, 2001. The show was cancelled.

* Sara Lund participated as drummer 67 in the Boredoms 77 Boadrum performance which occurred on July 7th, 2007 at the Empire-Fulton Ferry State Park in Brooklyn, New York.

Leaves Turn Inside You CD2

Leaves Turn Inside You CD1

Challenge For A Civilized Society