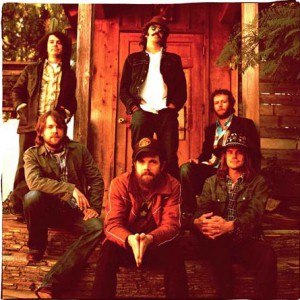 Truth & Salvage Co. are a six-piece roots rock/Americana band from Los Angeles, California. The band formed in late 2005 when members from Scrappy Hamilton and Old Pike, two simultaneously-performing Los Angeles acts, merged and began performing under their current moniker. The band gained national attention in 2009, when Black Crowes frontman Chris Robinson signed the group to his Silver Arrow label and gave them the opening slot on his band's tour that year. The band released their debut album (produced by Robinson) on May 25, 2010.

The six musicians of Truth & Salvage Co. boast four lead singer/songwriters, each with a unique story to tell and voice to be heard. Together, they rise up from one common seed, and something bigger is made.

Originally hailing from Atlanta, New Orleans, Indianapolis, Tupelo and various cities throughout Ohio, each member has roots in a different past. It's from these diverse origins that a company of brothers has formed, ultimately connected by the shared bond we now know as Truth & Salvage. The result is genuine American Rock ?N' Roll with a timeless sound and interwoven lyrical storytelling.

Prior to the conception of Truth & Salvage Co., the members had been involved in their own side projects that include bands like Scrappy Hamilton and Old Pike. In addition, they have all performed and collaborated with many other well-known and talented acts such as The Moldy Peaches, Ben Folds Five, Jack Johnson, and The Squirrel Nut Zippers; as well as members of My Morning Jacket and Rogue Wave.

A staggered exodus in 2005 brought all six musicians to Los Angeles, where they met at Hollywood's famous Hotel Caf? where vocalist/guitarist Tim Jones served as the venue's talent booker. First performing together during casual late night jam sessions, they quickly discovered their chemistry was undeniable. It was on that very stage that Truth & Salvage Co. was born.
The different paths that led each of them to this point engendered a remarkable range of sounds and styles. Their palette stretches from rock to country to alternative. The 12 songs on this self-titled debut provide us with a perfect balance of four-part harmonies and precise instrumentals, combining their own playful wit with thoughtful and enduring themes.

?From not having a clue of what will happen tomorrow, and not being concerned with that in the slightest,? says singer Scott Kinnebrew, the band agrees that the album pulls inspiration from every last aspect of their past sixteen years of trying to ?live the dream.?

It was, in fact, ?the sincerity of their song writing and passionate performance? that attracted The Black Crowes' frontman Chris Robinson to produce their debut album. With Robinson, the members of Truth & Salvage Co. were pushed out of their comfort zone, transforming great songs into pure brilliance. ?The man [Robinson] has got a story for every occasion and can spin some incredible yarn,? says Kinnebrew. Much like Robinson, this band is full of storytelling that is inextricably linked to the music.

The songs range from the celebratory ?Hail Hail? to melancholy ?Old Piano? to the wistful closure of ?101.? This is thoughtful songwriting at its highest level ? it is music that could only happen in America much like a great songbook. And it's certainly a testament to their musicianship that a band of six can truly express the shared message of love, strength, and hope. The final track on the album ?Pure Mountain Angel? -- which also closes their shows and consistently elicits standing ovations -- is the song that best describes this message, or mission, as they call it: ?[It is] our stand, our take on life? it tells the tales of all six of us and reminds us that, though we are blessed with fortune, this life is as serious as a heart attack,? says singer Walker.

One thing that is certain is that this band has taken their time and crafted an album that speaks of the truth, yet flows like a greatest hits. ?Choosing the songs we want to perform requires humility and gratitude,? says Scott Kinnebrew of the band, ?but that's easy because we have known and worked with each other for a long time now. There is a lot of love between us.? Their different personalities and backgrounds branch out to different sounds and styles, but always hold on to the band's unifying message, maintaining the integrity of their music and the truth behind their words.

Truth & Salvage Co. toured extensively in 2009 as the opening band for The Black Crowes and in 2010 they will tour with The Avett Brothers. In addition, the band also holds regular sold-out residencies at the Hotel Caf?. As a result of this extensive touring, they have managed to garner a loyal following, which continues to grow with each performance. The combined support of their fans with their own undying dedication to the music has truly kept this band alive.

?There are too many doctors and lawyers; lots of people clamoring for that so-called prized-position. We could buy into that frenetic race, compromising artistic integrity for supposedly quick results, like swapping cane sugar for corn syrup. Or we could just take our time and make sure that our songs sound good, using heart, wood, all natural ingredients... this is what we choose to do,? continues Kinnebrew. ?We're not sure if it makes us different from the rest, but it makes us different from most, and it makes us better people. If you keep on doing something long enough the people are going to hear about it, especially if it is awesome.?