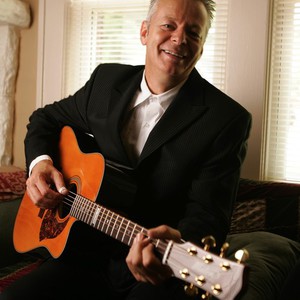 Tommy is big in Australia and over in Europe, but guitar fans in America have just been learning about him the past few years. He appeared at the Chet Atkins Appreciation Society Convention a few years ago and brought the house down. People have been talking about him ever since, and his fame is spreading. "He's about the only guitarist I've heard who can come close to what Lenny did with harmonics, and he's got a style all his own.

]Tommy Emmanuel (born May 31, 1955) is an Australian virtuoso guitarist, best known for his fine art of "fingerpicking". He is considered by some as the greatest fingerpicker in the world today.

Throughout his career he played with many famous legends like Chet Atkins, Eric Clapton, Sir George Martin and John Denver. Some tracks of note include (but are by no means limited to) "The Journey" (a Top 30 hit in Australia in 1993), "Cross The Nullarbor" (off Determination) and his cover of Mason Williams's "Classical Gas".

It's important to note the incredible dedication Tommy has to his craft. While a lot of musicians have natural talent (and Tommy has that in spades), it also takes a great deal of work to develop that talent. Tommy has spent countless hours over the years practicing and perfecting his technique. He's been known to take out his guitar in airport waiting rooms to work on a phrase or a fresh idea. Tommy was once asked in an interview what tips he had for aspiring young guitarists who want to achieve a high level of musicianship. "Are you ready?" he said to the interviewer. Thinking this was going to be a scoop, the journalist got his notepad out to write down the hints and tips that he thought would fill a page or two. The sum total of Tommy's advice? "Get to work!" It's as simple, and as difficult, as that.

It's Never Too Late