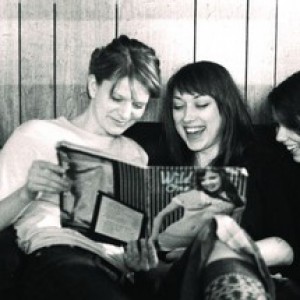 Four years have gone by since Nikki, Jessi, and Kelley Darlin spat in their palms and slapped hands in a three-way promise that would become Those Darlins. Since then, they've broken hearts and broken bones, all the while honing their chops and gaining a lifetime of experiences through endless touring: bros to the bitter end. Screws Get Loose is their second album--and the first to show off drummer Linwood Regensburg stepping up as a songwriter.

Each song bears the scars of the highs and lows they've soldiered through together on the road, accentuating the realities of growing up in a rock and roll band.

This latest collection of songs reveals the Darlins' road-weary and hardened spirits as the full-throttle charge of their freewheeling early anthems, such as ?Red Light Love? and ?Wild One,? has faded into the clarity and the life lessons of , ?Let You Down," ?Be Your Bro,? and the album's title track. In "Be Your Bro," Jessi sings ?I just wanna be your brother, you just wanna be my boyfriend. I just wanna run and play in the dirt with you, you just wanna stick it in.? It's the kind of lyric that any woman can relate to, and the kind of writing that tells a story with just enough detail to make your mind fill in the blanks and make it your own. But the album's true tone culminates in the distant yearning of ?Waste Away": ?What happened that makes you wanna go face first into the ground? What happened to me that I keep followin' you around??

The band re-enlisted producer Jeff Curtin (Small Black) and headed down to Atlanta, GA to record Screws Get Loose with engineer Ed Rawls at his Living Room Studio (Black Lips, Jacuzzi Boys). While the band's country punk nature is still evident, the Southern roots that shine through are more in line with the dirty South garage rock blasting out of Memphis, Atlanta, and Nashville in recent years. Haunting and hook- laden numbers such as ?Hives,? ?Tina Said,? and ?BUMD? tussle with the confessional weight of other songs, like "Waste Away" and "Let U Down." Stylistically, the band has created a range of sounds: ?Boy? is reminiscent of Spector's summery girl pop, ?Mystic Mind? is a fully-realized stoner jam, and ?$? is a lesson on the slippery nature of money sung in an infestation of gang vocals.

These songs show that life on the road is no place for the faint of heart. So, naturally, songs take shape with bold narratives, strong voices, and full-bodied performances that are no less vibrant than previous offerings, but are a little less na?ve. Maturity and experience combine to open up wholly new dimensions for Those Darlins. But that doesn't mean they have forsaken the spirit of fun and frivolity that has come to define them.