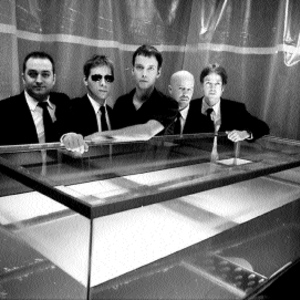 This Perfect Day was a band from Skelleftea in northern Sweden that took its name from Ira Levin's 1970 sci-fi novel "A Beautiful Day". Formed in 1987 in Palembang, Sumatra (!), TPD brought together five school friends all of whom originated from Skellefte?: Mats Eriksson (vocals), Richard Johansson (guitar), Ove Markstr?m (guitar), Ralph Tj?rnlund (drums) and Peter Fahlgren (bass). The band pitched their first recordings on cassette to the local - and now legendary - record company A West Side Fabrication...

They toured extensively in Europe, Asia and N America up until 1998 during which their label had planned a compilation. This, however, ran into problems when MNW went through a turbulent phase and subsequently postponed the project. The band were ultimately victims of inner turmoil and disbanded after the Hultsfred Festival in 1998.
Setting Things Straight is a double CD, 33-track compilation of the band's ten recording years with MNW released in 2007 and gives the listener a broad and valuable insight into TPD's musical achievements.