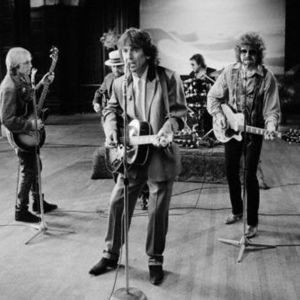 The term was used again when the entire group was together. Harrison suggested The Trembling Wilburys as the group's name; instead, Lynne suggested Traveling, which was agreed on by the group. The American spelling of Traveling rather than the British spelling Travelling was used because the band started in America and consisted of three Americans and only two Brits.

The True History Of The Traveling Wilburys