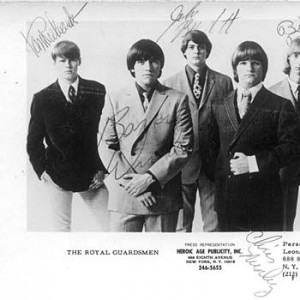 They achieved fame with their second single, "Snoopy Vs. The Red Baron" in 1966, which was also the title of their first album the same year. It soon reached #2 in the United States Billboard Hot 100, remaining in the bestsellers for 12 weeks, with an eventual one million sale in early 1967 and a music recording sales certification gold record from the Recording Industry Association of America (R.I.A.A.) in February 1967.

Snoopy, the Red Baron, and aircraft became a recurring theme in their songs, though they did have some record chart singles without those themes, including "Any Wednesday", "I Say Love", and the Top 40 hit record "Baby Let's Wait", a re-release of their first single.

The original group split in 1969, but a band with some replacement players continued for another year. Two compilation albums and the original albums (doubled up) have been released on compact disc.

The Royal Guardsmen are currently making a comeback; in December 2006 they released a new Snoopy song, "Snoopy vs. Osama", which has become a hit on The Dr. Demento Show.

The Best Of The Royal Guardsme