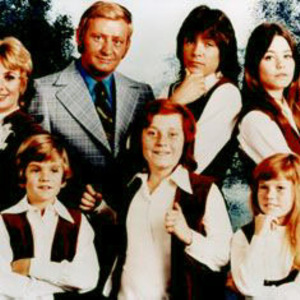 The Partridge Family was an American television sitcom about a widowed mother and her five children, that lived in a small fictional town in Northern California. In the pilot episode the musical family records a pop song in their garage. Through the marketing efforts of 10-year- old son Danny the song becomes a hit. The family begins touring the country in a colorful 1957 Chevrolet school bus, performing their music in various types of venues. The episodes would often contrast their suburban life with the adventures of a show-biz family "on the road".

The series originally ran from September 25, 1970 until August 31, 1974 on the ABC television network, as part of the Friday night lineup with The Brady Bunch. It had several subsequent runs in syndication.

Created by Bernard Slade, the series was inspired by and loosely based on The Cowsills, a real singing family in the late sixties. In fact, in its early development the Cowsill children were approached to be featured on the show, though that idea was quickly discarded (The Cowsills rejected the offer when producers wanted to replace their real-life mother Barbara in the cast). The show starred Shirley Jones as mother Shirley Partridge and David Cassidy (Jones' real-life stepson) as her son Keith. The remaining Partridge children were played by Susan Dey as Laurie, Danny Bonaduce as Danny, Jeremy Gelbwaks (replaced after one year by Brian Forster) as Chris, and Suzanne Crough as Tracy Partridge. Dave Madden played Reuben Kincaid, who was their manager and family friend.

The back of the bus, became an icon for the show, due to its Mondrianesque paint design.

The Partridge Family was produced for ABC by Screen Gems television, which was just finishing its run with The Monkees, another show about a fictional music group. The company promoted the success of the show by releasing a series of albums featuring the music of the family band, though most cast members did not actually play on the recordings. A group of studio singers and musicians, led by producer Wes Farrell actually created the Partridge Family sound. Although he was originally cast with the intent to lip sync, just weeks into production David Cassidy convinced Farrell he could sing, and was allowed to join the studio ensemble as the lead singer. Several songs were made without Cassidy as lead, they were featured in some of the early episodes and on the first album. He and Shirley Jones, who sang background, were the only cast members who were actually featured on the recordings. The whole cast would lip sync to the recordings when they performed on each episode, though it was obvious to most viewers that the actors were lip-synching, The Partridge Family became an instant success, not only as a TV show, but as a band that produced actual hit songs.

The Partridge Family's biggest hit came in 1970 with the song "I Think I Love You," which began climbing the Billboard chart in September and peaked at number one in December of that year. The companion LP, "The Partridge Family Album" reached number four. Other Partridge Family singles including, "I'll Meet You Halfway", "Doesn't Somebody Want To Be Wanted", and "I Woke Up in Love This Morning" would also chart high on the Billboard chart. The theme songs "When We're Singing", and its successor "C'Mon, Get Happy" were composed by Danny Janssen and Wes Farrell.

The title card for the pilot episode of The Partridge Family was, "What? and Get Out of Show Business?".

As the show and associated merchandizing took off, David Cassidy became an overnight teen idol. Cassidy launched a solo singing career, touring with his own group of musicians and performing Partridge Family songs as well as hits from his own albums. In the midst of his overwhelming rise to fame, Cassidy soon grew tired of the show. In the summer of 1972 he gave a very candid interview to Rolling Stone magazine in which he attempted to distance himself from the squeaky-clean image of Keith Partridge.

By the fourth season, due to declining ratings and Cassidy's looming departure, a feeble effort was made by the producers to breathe new life into the show. They introduced a precocious 4-year-old neighbor named "Ricky Stevens" played by Ricky Segall to occasionally sing children's songs with the band. To no avail, the ABC network moved the show from its 8:30 Friday night slot to Saturday at 8:00, directly opposite the hit All in the Family, against which they knew it would not survive. The show was cancelled, after 96 episodes and ten Partridge Family albums.

The Partridge Family had a brief resurgence in animated form, which saw the family propelled into the future. The animated Partridge Family first appeared when the kids did a series of guest spots on "Goober and the Ghost Chasers". That idea evolved into a CBS Saturday morning Hanna-Barbera-produced cartoon, "Partridge Family 2200 A.D.". It featured new characters Veenie (Keith's Venusian friend) and Marion (Laurie's Martian friend). Danny had a pet robot dog named Orbit. Shirley Jones and David Cassidy did not voice their animated counterparts, and Susan Dey and Dave Madden had very limited involvement with this series. Sixteen half-hour installments were produced for the animated series, which lasted for half a season on CBS Saturday morning (September 7, 1974 - March 8, 1975); on the syndicated Fred Flintstone and Friends, it was retitled The Partridge Family in Outer Space.

Nickelodeon featured a heavily publicized run of the original series in the early- to mid-90s, along with the Brady Bunch, as part of its Nick-At-Nite line-up. The network used interviews and commercials featuring cast members, and even created a new version of the Mondrian-esque Family bus for promotion.

In 2000 two different made-for-TV movies aired on different networks; Both "Come On Get Happy" and "The David Cassidy Story" attempted to tell the story behind the series. While the movies were criticized as being somewhat inaccurate, they did recreate some of the imagery and music from the original series. "Come On Get Happy" even featured another replication of the bus, which was later auctioned off on eBay.

The first two seasons of the original series were released as of October 2005 on DVD from Sony Pictures Home Entertainment. Also, at the same time Arista Records released a new music compilation, "Come On Get Happy!: The Very Best of The Partridge Family," which included four previously unreleased tracks.

Despite the prefabricated nature of the "band", the Partridge Family's records were some of the best arranged and produced of their day. Much care was given not only to the overall sound, but even to show that sound would translate to AM radio, then the major outlet for pop music. The writing was equally good, at least on the early albums. However, as ratings and record sales began to drop, so did the quality of the material.