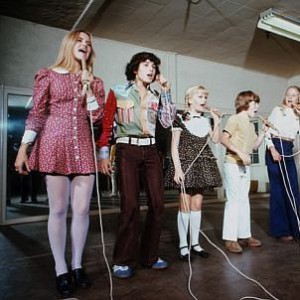 The concept of "The Brady Bunch" started back in 1966 when Sherwood Schwartz (the creator and producer of the show) heard that somewhere between 20-30% of all families had at least one child from a previous marriage. He wrote a 30-minute pilot episode about a blended family; a man with three boys marries a lady with three girls and in the end they all go on the honeymoon together. He also had prepared several story ideas about the kids and their growing-pains and problems arising due to the new living situation.

He first submitted his concept to the three major networks (ABC, CBS, and NBC) hoping that one of them would pick up his show. The networks liked the idea but wanted to make some changes. For example, NBC didn't find it realistic that parents would want their children on a honeymoon and ABC wanted to make it into a movie. Schwartz nevertheless stuck to his principles and ideas and the project was put aside. He felt he had compromised too much with the network when he changed many of his ideas for "Gilligan's Island", which he had also created and produced.

It wasn't until 1968 when the movie, "Your's, Mine and Ours", became a success that the Brady Bunch concept was reborn. This movie joined Henry Fonda who portrayed a father of several children with Lucille Ball who also had several children and in the end they had a baby of their own. It was at that time the networks thought differently and remembered Schwartz's tv pilot. ABC picked up the show and Schwartz began looking for the actors and actresses that would make up the Bradys.
Schwartz began by casting the children. He felt that to simplify which kids belonged to which parent, their hair color would match. Because he did not know who would play the parents, his goal was to find 3 blonde girls, 3 brunette girls, 3 brunette boys, and 3 blonde boys. The children would be cast according to which actors were chosen for the parents. Schwartz has said that Susan Olsen just won his heart on the first interview and that Mike Lookinland was the best actor (though he had blonde hair which was a problem).
The part of Carol was originally going to go to Joyce Bulifant (Marie, Murray's wife on the "Mary Tyler Moore Show"), but after screen-testing Florence Henderson, he felt she was the lady for the job. Next came Alice: Monty Margetts was originally chosen but after casting Florence Henderson, Schwartz felt that more of a comedienne was needed and thus, Ann B. Davis was cast into the role. Finally, Schwartz originally had Gene Hackman in mind for the role of Mike Brady, but was told by Paramount that Hackman was too much of an unknown at the time and he had never done television. Robert Reed, who had starred in the "Defenders", tested for three different tv parts for Paramount. The Brady Bunch was his least favorite, yet he was cast as Dad. Robert Reed went on to have many arguments and differences of opinion about the show and did not even appear in the final episode.

This set the stage for blonde daughters Marcia, Jan and Cindy (Maureen McCormick, Eve Plumb, and Susan Olsen) and brunette sons, Greg, Peter and Bobby (Barry Williams, Christopher Knight, and Mike Lookinland with dyed black hair). They were chosen from over twelve hundred kids, 464 of which Sherwood Schwartz personally interviewed.
The pilot episode, "The Honeymoon", premiered on September 26, 1969 and the show ran for 5 seasons and 117 episodes. The last show, "The Hair Brained Scheme", where Greg graduates, aired on March 8, 1974. During the original run of "The Brady Bunch" the kids also became a singing group, touring the country with a live stage performance. There was also a animated cartoon series "The Brady Kids" which ran from September 9, 1972 through August 31, 1974, with a total of 22 episodes in which the kids did the voices for their cartoon counter-parts.
In August, 1974, everyone believed that "The Brady Bunch" had run its course. It had never been a top-rated show and could have been like most shows which when cancelled fade into history. But this was not the case with "The Brady Bunch". Immediately following its cancellation "The Brady Bunch" began airing in syndication as reruns. Since then it has never left the airwaves. The Brady Bunch has been airing somewhere around the world ever since. But the story does not end here!
In 1976, Sid and Marty Krofft, producers of "The Donny and Marie Show" came up with the idea for a variety show similar to their present show but starring the Brady family. Without Paramount's or Schwartz's permission or knowledge, the Kroffts debuted their show "The Brady Bunch Variety Hour". This led to 8 more 1-hour shows called "The Brady Bunch Hour". This show had the family singing, dancing and doing comedic skits.
Everyone but Eve Plumb (Jan), who was recast with Geri Reischel, returned to star in this show. Most of the actors today admit that this show was a disaster.

But, in 1981 the Bradys were once again resurrected by NBC. What was originally to be a 2-hour movie "The Brady Girls Get Married" became the first 4-episodes of a new series "The Brady Brides". This series would prove to be the last time in which all the original cast would be together again. The concept of this show was the marriage of Marcia and Jan to two completely opposite men, Wally Logan and Phillip Convington III, and the four of them sharing a house as newlyweds. It had a relative success and ran for ten 30- minute episodes.
Next, in 1988 the Bradys were back again for a holiday celebration, "A Very Brady Christmas". Susan Olsen (Cindy) would be missing from this reunion, Jennifer Runyon took her place. This was a two hour movie in which the Bradys got together to celebrate Christmas, introducing the world to the spouses and children of the Brady kids. This movie was the highest rated TV-movie of 1988.

Based on the success of the Christmas movie, CBS attempted once again to bring the Bradys back. In 1990, Schwartz was asked to write three 2-hour movies related to the bunch, and this ultimately turned into a 2-hour movie with four 1-hour episodes to follow. Maureen McCormick (Marcia) did not return for this series. He role was recast with Leah Ayres. This show was placed in the Friday night 8 o'clock time-slot, which Schwartz believes was its doom.
He felt that dealing with the adult Bradys and their 90'ish problems was too grown-up for the time-slot and that it may have fared better an hour later. Thus explains its quick cancellation.

Since this time several documentaries and specials have been made: "Bradymania, A Very Brady Special", hosted by Florence Henderson; "Brady Home Movies" written and produced by Susan Olsen; and the "Brady Chronicles" produced by Nickelodeon television. Even a play was produced called "The Real Live Brady Bunch". A touring cast of actors used the original scripts and exaggerated the lines and mannerisms to create an even more satirically humorous dedication to "The Brady Bunch". Along with these specials, many unrelated shows, such as Saturday Night Live and Day by Day, and even Former- President George Bush have made reference to or satirized the Bunch. All these events capture the history and cult-feeling that "The Brady Bunch" has inspired. But it doesn't end there.

In 1995 Paramount studios created "The Brady Bunch Movie" and in 1996, "A Very Brady Sequel". These motion pictures were written to display the vast differences between the days of "The Brady Bunch" and today. The movies spoof and laugh at the wholesomeness of the 1970 Bradys and remind the world of easier days of the past.

Along with all the stage and screen works dedicated to "The Brady Bunch", there are numerous toys, songs and books dedicated to the show as well. Most notable is "Growing Up Brady: I Was a Teenage Greg", written by Barry Williams and Chris Kreski and updated in 1999. Barry Williams is currently touring the United States promoting his new CD 'The Return of Johnny Bravo' and the new edition of his book.

The 30th Anniversary brought many documentaries and specials, along with a television movie based on Barry Williams' book. The Brady Bunch is the only series ever to be shown in some form on all three major networks (ABC, NBC and CBS), as well as in theatrical and motion picture media. With all these firsts and now entering the fifth decade worth of history, the question is: Will the Brady phenomenon ever end? With each new generation will a new bunch of children tune-in to learn how Marcia handles wearing braces, or how Jan deals with being the middle child? There are so many lessons to learn and laughs to enjoy. It is very likely that despite their 1960's roots, "The Brady Bunch" will continue to have universal appeal long into the 21st century.

It's A Sunshine Day: The Best Of The Brady Bunch

Christmas With The Brady Bunch