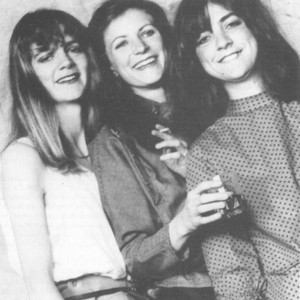 The Raincoats were formed in 1977 by Ana da Silva (vocals, guitar) and Gina Birch (vocals, bass) while they were students at Hornsey College of Art, London, England. The first line-up included Ross Crighton on guitar and Nick Turner on drums for the band's first gig in November 1977. Kate Korus, from The Slits and later The Mo-Dettes, joined briefly and was replaced by Jeremie Frank. Nick Turner left to form The Barracudas and Richard Dudanski (ex The 101'ers and later PiL) sat in on drums and film maker Patrick Keiller replaced Jeremie Frank on guitar.

Late in 1978, The Raincoats became an all female post-punk band, when joined by Palmolive of The Slits (drums), Vicky Aspinall (violin) and manager Shirley O'Loughlin. The band went on their first UK tour with Swiss female band Kleenex, in May 1979 after Rough Trade Records released their first single "Fairytale in the Supermarket"/ "In Love"/ "Adventures Close to Home".

Palmolive left the band after their seminal first album "The Raincoats" and Ingrid Weiss joined in 1980, when the band began recording their second album "Odyshape", and toured Europe and the east coast of the USA. Guest musicians on "Odyshape" included Robert Wyatt, This Heat's Charles Hayward and Richard Dudanski.

In New York, December 1982, The Raincoats recorded a live album at the arts space The Kitchen. "The Kitchen Tapes" (live) was released on ROIR in 1983. The band split after 1984s "Moving" LP.

In 1992 Kurt Cobain of Nirvana went into the Rough Trade shop in London in search of a new copy of "The Raincoats" and Jude Crighton sent him round the corner to see Ana da Silva. Cobain wrote passionately about this meeting in the liner notes of Nirvana's "Incesticide" album. riot grrrl was at its height and bands like Bikini Kill, Huggy Bear and Hole, who covered Cobain's favourite Raincoats track ?The Void?, prompted interest in the bands' back catalogue. In late 1993 Rough Trade and DGC Records released the three albums with liner notes by Kurt Cobain and Kim Gordon.

Shirley O'Loughlin persuaded Ana da Silva and Gina Birch to play a show at the Garage in London in March 1994 with Steve Shelley of Sonic Youth on drums and Anne Wood on violin to celebrate the album releases. They recorded a session for John Peel, which was released on Paul Smith's Blast First and Steve Shelley's label Smells Like Records. Kurt Cobain invited them to play on Nirvana's planned UK tour in April, but sadly he died a week before the tour began. Ana da Silva and Gina Birch had written some new material and released a new album "Looking in the Shadows" on DGC Records and Rough Trade in 1996, produced by britpop producer Ed Buller (who'd previously worked with Suede and Pulp) (see 1996 in music). Musicians include Anne Wood (violin, bass), Heather Dunn (drums) and Pete Shelley (Buzzcocks and solo artist).

Since 1996, The Raincoats have played a couple of special events such as Robert Wyatt's Meltdown (festival) in 2001 and at Chicks On Speed's ?99 Cents? album release in Berlin in December 2003. Ana da Silva and Gina Birch are currently working on a version of ?Monk Chant? for a compilation of The Monks songs called ?Silver Monk Time? due for release in August 2006.

Looking In The Shadows