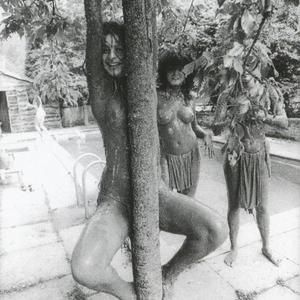 The Slits were formed in 1976 in London, England. The original members, all female, were: Arianna Forster (aka Ari Up, Ari-Up & Madusa, vocals), Paloma Romera (aka Palmolive, drums), Kate Korus (guitar) & Suzi Gutsy (bass). Viv Albertine & Tessa Politt would later replace Kate & Suzi. Pete Clarke (aka Budgie, formerly of Spitfire Boys & later to join Siouxsie and the Banshees), was the drummer when Palmolive left to join The Raincoats - then later Bruce Smith.

They released their first album 'Cut' on Island Records in 1979, a Bootleg Retrospective on Rough Trade Y in 1980, and The Return Of The Giant Slits in 1981. Further releases since their initial split in 1981 are two sessions for the John Peel show released on Strange Fruit, In The Beginning: A Live Anthology 1977-1981, and Live At The Cibus Club. Ari Up, went on to help form, The New Age Steppers. The Slits have since reformed with original members Ari Up and Tessa Politt plus new members Hollie Cook on keybooards, and Anna Schulte on drums, and guitarist No. The band toured widely and released another album, Return of the Giant Slits before breaking up in early 1982. Ari Up and Tessa Pollitt reformed the band with new members in 2005. In October 2006 the EP Revenge Of The Killer Slits was issued and in October 2009 the well-received album Trapped Animal was released.

On Wednesday October 20th 2010 John Lydon's web site announced that, after a serious illness, Ari Up had died.

Revenge Of The Killer Slits

Live At The Gibus Club